Manu Hermia, interview with the Belgian flautist and saxophonist

I met Manu Hermia during the Belgian Jazz Meeting 2017. The bansuri player and saxophonist took part in the showcases with his trio he had recorded e. g. the album “Austerity”. In the Liner Notes to the album you can read the following lines: “Austerity... and what about rage?” Just like free jazz in the sixties and seventies, “Austerity… and what about rage?” is a cry of absolute rage against the current politico-economic context. As Manuel points out: "Free jazz was born in the US in a very specific socio-cultural historical context. But essentially, it’s a musical form that can have meaning in any society in any age. It expresses the transformation of the world around us, highlighting the gentleness, fear, chaos or rage that this awakes in us. In that respect, libertarian jazz can take on its full meaning in today’s Europe.” 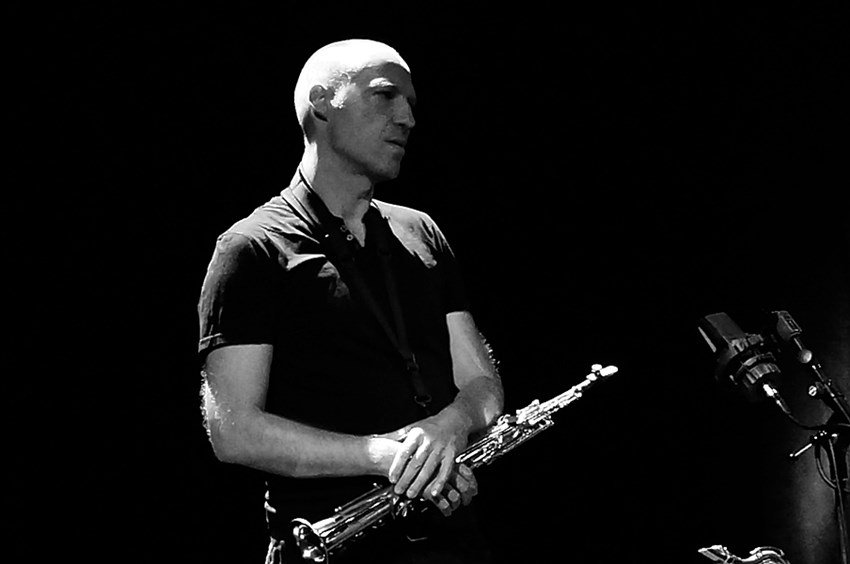 You play bansuri and saxophone. Is there any preference for you considering the two wind instruments?

MH: No, not at all. I really feel that I play both instruments on an equal base. Even though I play in some projects only the sax. The bansuri, I like it because I started to discover this flute when I was travelling in India. Most of the flutes played in so called World Music are not flexible, like the Japanese shakuhachi, which is very difficult to play. But the bansuri, even if it comes from India, seems to me also convenient to play African or Arabic music. I even tried to play Charlie Parker solos on it, even it is not made for it 😊. So, the bansuri is a flexible instrument, and as an improviser it allows me to play only one flute, while appraoching different world music styles, instead of playing many different flutes that would have different fingerings, which would make it impossible to keep my reflexes as an improviser.

Am I right that the wood wind instruments are your favourites and not brass?

MH: Brass instruments needs a mouth effort that is a little paradoxal with the effort needed by woodwinds. But playing both the flute and the sax, that works really well.

Do you think the flute and the saxophone, especially alto saxophone, is very close to the human voice  thinking of singing and chants?

MH: I heard that the cello and the tenor sax are the closest instruments to human voice. And I think the bansuri in F or E is quite close as well. I am attracted by wind instruments, I know that. The thing is: I love to create sounds by blowing. And I also realized bamboo is the common material for the reeds of the sax and the bansuri flute, of course. 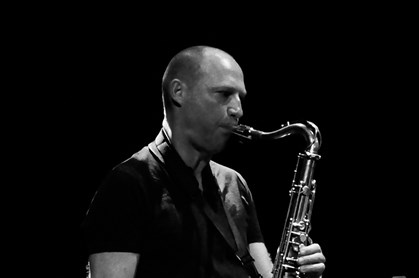 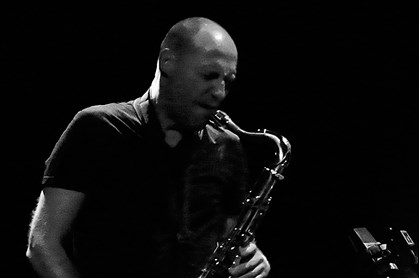 Did you ever try out didgeridoo?

MH: No. I play saxophone, flutes and clarinet also. I do not feel the need to play more instruments.

You play alto and soprano sax. What are the consequences for the tunes you play? Is there a certain limit or a boundary you can not cross over?

MH: No, but there are some repertoires I am more attracted to. If I play Bebop I feel more comfortable using my alto. Playing modern jazz, I usually rely more on my tenor. And when I play a mix between Jazz and World Music I mainly play soprano sax and bansuri. But it all depends on the music and the range I have to tackle, so when I start a new project I take them all with ma and I act as  a painter in some respect; and try out some sounds with this or that instrument to listen how it sounds. You know, at the beginning I was a bit lost when I had to change instruments for every tune, but with the years I got so used to it that I do not put efforts into that, it became totally natural.

Do you remember the first Jazz tunes you came across and you got hooked to Jazz?

MH: My mother met my stepfather when I was eleven. My contact with Jazz was almost not existing at that time. My stepfather was a  Free Jazz lover but not only. He had collected 4000 up to 5000 records at home, and this was my new home, yeah. Every time he was at home he was listening by alphabetic order to some records. It was like a media library at home. There was a lot  free Jazz like tunes by Coltrane, Archie Shepp, Albert Ayler. So the first jazz style which attracted me was free jazz. But at that time I used to play only clarinet. My first experiences in jazz were free impro and New Orleans, the two extremes of jazz history somehow. So I took my love for jazz from those two extremities. The first concert I attended was one by Sun Ra but I saw a Shepp's live performance as well. It moved me really. I was round 13 years old at that moment. 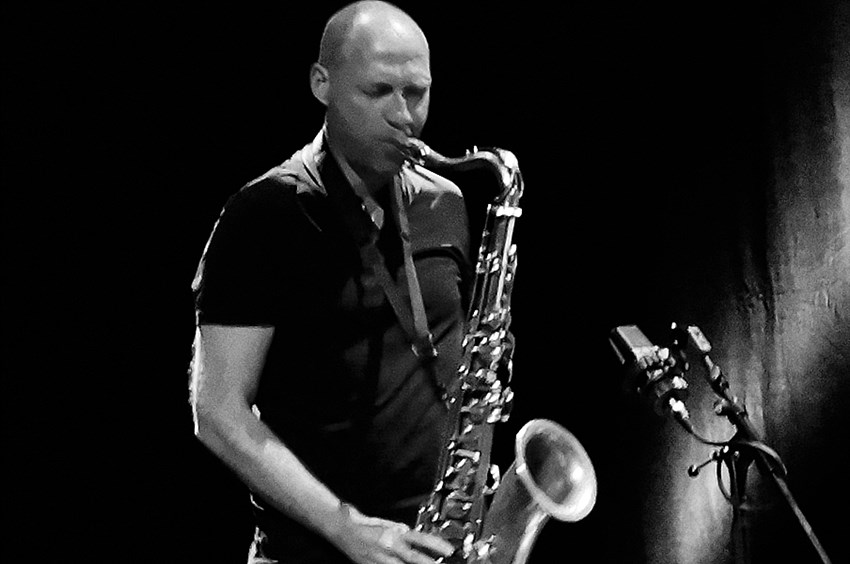 Would you say that Free Jazz is important for your own performance and for the process of composing tunes?

MH: Sure. Not only but it is. I got the impression that with the teaching system there is a lot of energy which is taken to learn to improvise on mainstream jazz, but somehow not so much energy left to learn free forms of improvisation. You know, there are many ways to approach free improvisation, many ways to create frames to improvise. But there is a global misunderstanding even amongst some musicians, leading to believe that free jazz is bullshit… Anyway, for me, this kind of jazz is a very pure form of art. It took me a long time in my career before I assumed recording some free improvisations, but that actually depended on meeting the right persons to form a trio like the one I share with Manuel Cabras and Joao Lobo. Meeting them was like… Wow! It was a kind of revelation.

You perform in a trio formation and in laeger formations especially in the project Wispers of the Orient. When comparing the various formations would you think that the trio is the most ideal formation for expressing yourself?

MH: The trio format has something magical for two reasons. First of all I love bands with a lot of space for expressing each other. Of course that is possible in a trio and less in a septet. There are too many arrangements needed in bigger formations. And then, the thing is that in any trio, there is something lacking somehow. You can have a trio without a drums, or a trio without a harmonic instrument, but in every type of trio you’ll have space and freedom, and at the same time you’ll have much more responsibility to take because of the « missing » instrument. That makes teh work in trio very interesting to me. 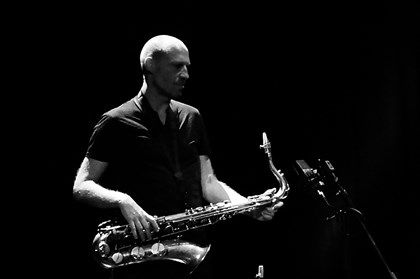 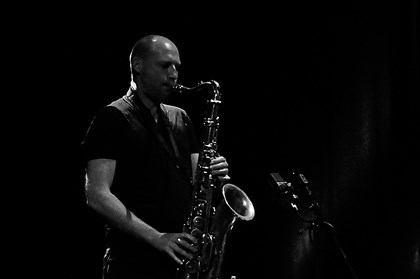 What's about the band Slang you used to play? Does Slang play World Music or Jazz?

MH: It’s an unlabelled type of music of a band formed 18 years ago. That is a long time ago. It is not my main project now, but it was for more than 10 years in the past. At that time it was really the purpose to create a new type of band. It was not so common yet to switch from classical music to Jazz and other genres. We tried out a lot of things, and that was a very rich experience for me. In my latest project with Ceccaldi/Darrifourcq we make use of the past experience and styles between contemporary music and somehow Jazz. The same refers to Orchestra Nazionale della Luna. It started as a Jazz quartet and we added some electronic music to widen the concept. Expanding the jazz and the concept of improvisation to all music styles is for me the main red line I try to follow.

Why did you decide to form a trio with a cello instead of a double bass thinking of Hermia/Ceccaldi/Darrifourcq and the album “God At The Casino”? Cello is pretty rare.

MH: It was not really a decision going that way. With my trio, we played at a festival in Orleans on the same stage than Valentin Ceccaldi. We got drunk after the festival and we really appreciated each other and said that we wanted to play together The programmer of that stage at the festival immediately proposed us a date at the same festival one year later. Then we called Sylvain Darrifourcq to join us. Therefore I did not pick a cello player by purpose. We just met and felt like playing together and realizing a common project.

How important is the crossover of western and oriental music?

MH: I began to travel in India 20 years ago and played a lot of Arabic music as well. Those musics has been very rich since centuries. Ragas and Maqaams do not use chord changes, it is modal music, so the rules of improvisation are totally different. In jazz we use 15 to 20  scales and modes, but in other types of music you’ll find hundreds of different modal colors. That makes it richer. The Orient is more and more present in Europe and has so much to offer.
Also I love to play crossover to be able to mix both music languages. My personal research field is a contemporary concept I created and called « Rajazz ». It really does try to mix the improvisation rules of those two different worlds, to create a new one. 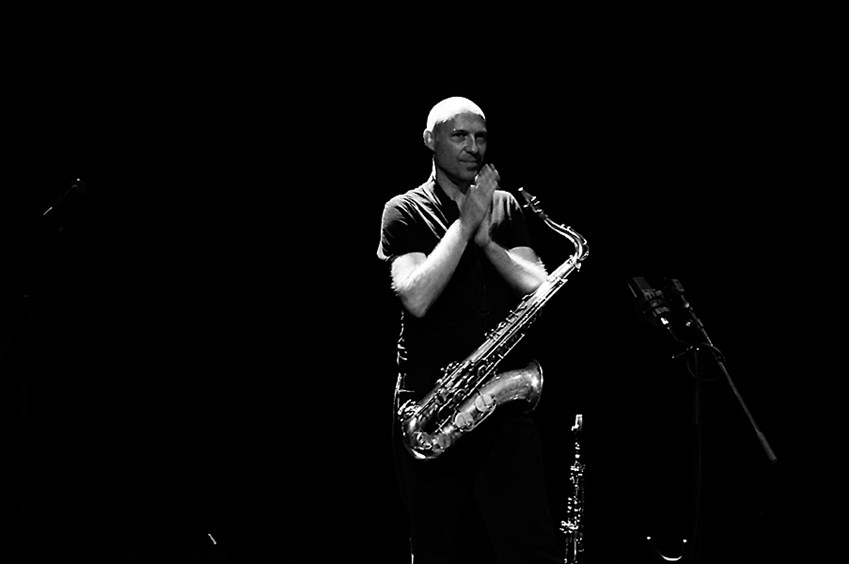 Interview and photos © ferdinand dupuis-panther / The review is not public commons!