The Budapest Music Centre (BMC) was founded 18 years ago. It has built a database of 3000 musicians, and 10,500 compositions, and runs a library, a label, concerts and festivals from a handsome renovated building in Budapest’s cultural quarter that was opened in 2013. Once, Hungarian jazz musicians had to leave their country to play, like guitarist Attila Zoller - who played with Lee Konitz , Albert Mangelsdorff and Martial Solal - or Gabor Szabo, who played with Chico Hamilton and Charles Lloyd. Times have changed, and these days musicians came from far and wide to play in Budapest.

Belgian journalist Claude Loxhay interviewed György Wallner who is responsible for International Relations at the BMC : 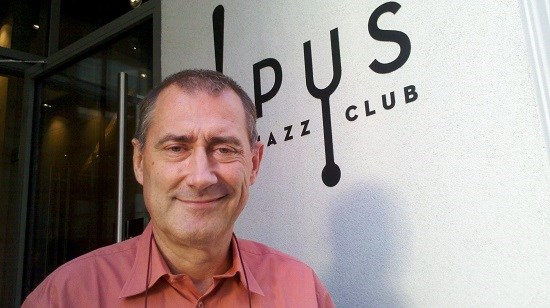 How did the Budapest Music Centre start?

The Centre was established as a private company in 1996 by László Göz, a trombone player at home in both jazz and classical music. He was a teacher in the jazz department of the Academy of Music in Budapest, I think, for three decades. He established the BMC more or less single-handed: he was the owner and had one helper.

What were its aims ?

The aim, was, and is, to promote not only Hungarian music but also other musicians and composers who contribute to Hungarian musical life. That is the simple reason why he did it. Before the 1990s, there were structures organized by the state, but they were inefficient. László wanted a database to know who is playing in Hungary : who are the musicians and the composers, where are the concerts ?

In the beginning, BMC was an internet database. There were only a couple of websites in Hungary then: the BMC site was the first to offer information about Hungarian musicians, across jazz and classical or contemporary music. But very soon he thought he had to expand this thing, trying to release records, and organize concerts or festivals. Before he established BMC, he and a friend had founded a small label called Bouvard and Pécuchet, and they released some jazz albums. They funded it using payments from a film score they produced together, but the label was short-lived…

But now there is the BMC label too ?

The label BMC was founded in ’98.. The first jazz musicians who released albums on it were mostly his fellow musicians, his own group, but since then the label has expanded. The first international release was not a jazz record, but a contemporary one, by the Hungarian composer Peter Eötvös who, at the time, lived in Holland : a record called Atlantis, a composition for baryton, cymbalom and orchestra.

Then in jazz, the Hungarian Jazz Trombone Company invited the American Carl Fontana for a concert in Budapest. He played standards with László, who suggested they record together… I think it was the last record by Carl Fontana. It was not available everywhere but it was reviewed in the United States. So, thanks to these 2 albums, we could start the label. In 1999, they started international distribution, for instance in the United States, thanks to a distributor of Hungarian origin. Then, after the website and the label, came a festival in Budapest. It developed step by step.

The aim of the label was to promote jazz as well as classical music but with a connection with Hungarian traditional music, for instance the cimbalom...

Yes, there was a cimbalom on Atlantis, but it has also featured in jazz. For instance Miklós LukácsÂ (http://mikloslukacs.com/index.php/en/)
worked with the pianist Béla Szakcsi Lakatos in 2008. Everything what happens on the music scene in Hungary interests us… BMC is a communication platform between jazz and classical music but also traditional roots. There are labels for Hungarian traditional music, like Fono, so our aim is not to promote traditional folk music but what's going on now. On our label, all the traditional elements appear in a contemporary context. Miklós Lukács has origins both in the gypsy folk music and in classical music, playing György Kurtag for instance, and in jazz. It is the same with Béla Szakcsi Lakatos, he is an excellent pianist, he played jazz with Jack DeJohnette (“Szakcsi Generation” in 2006) but he is a gypsy and he has his roots, his feeling. He plays the best gypsy music when he doesn't think about that. He has a natural language.

Or take the Mihály Dresch Quartet. He doesn't do an artificial mixture of Afro-American jazz and his Hungarian roots : it's just his soul. He fell in love with jazz when he was fifteen or sixteen and heard Archie Shepp and John Coltrane. He was completely excited by that music, he started to play the saxophone, he joined György Szabados (http://en.wikipedia.org/wiki/ György Szabados), the father of Hungarian free music, who used elements of Hungarian folk traditions. His own style became really organic. We made a record with Archie Shepp (Hungarian Be Bop). It was so nice to see that. Archie felt this special melodic world, and he could play like a Hungarian. These folk elements come always very organically. 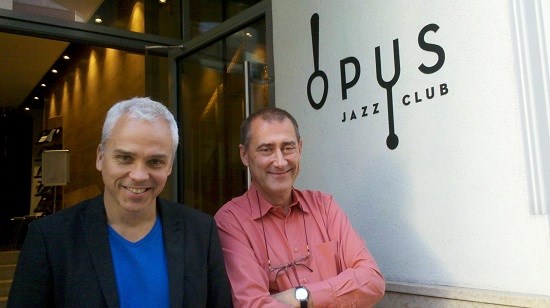 On the label, you have several other American musicians...

You have also organized a New music Forum since 2008...

Yes, now we organize concerts four days a week in our Opus Jazz Club, and we participate in the Budapest Spring and Autumn Festivals which have their own budget. We try to have some special themes. In September, we had a Czech Jazz Weekend, and, in October, a French Jazz Weekend, with Sylvain Luc and Gabor Gado with Régis Huby and Jean-Luc Cappozzo. In November, a Polish Jazz weekend.

How does your Jazz Club fit in ?

In Hungary, we need a new jazz audience. Most of the jazz fans are people of my age, they went to festivals in Warsaw or Zagreb and mostly it was American jazz. They still like this style of music, they think that jazz is only an Afro-American thing and they don't really know the European jazz scene. So we need a new jazz audience who think that jazz is just a contemporary music which is enjoyable in different forms. We have a club near the University and the students come to hear and to discover the European jazz scene. In the nineties, Hungarian jazz was a little bit isolated. These days our minds are much more open to the European scene.

This translation was kindly done for Jazz'halo by the British writer Jon Turney. Please check out his website:
http://l.facebook.com/l/RAQE8aoMwAQHdnABpBY-z6qvl0pf_ZX63okYaT54Em8QHsw/jonturney.co.uk/