I had the chance to meet Vincent Courtois at the JOE Festival Essen before he was due to get on stage with Louis Sclavis. Courtois made straight comments about his music like: “I feel that my music has become more precise, evolving towards an ideal point or place – great spaces, melodic silences, monumental landscapes one can travel on intimate routes, thanks to mysterious hidden maps.” 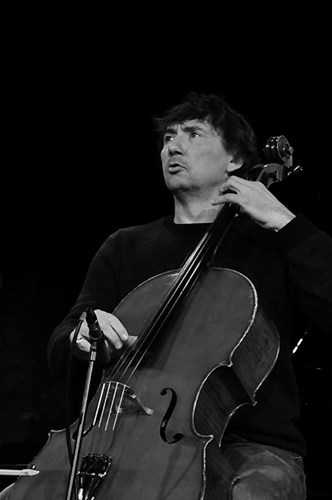 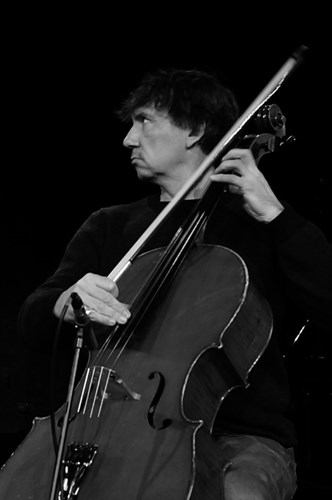 You started to play the cello at the age of six. Why did you pick that instrument instead of the piano?

VC: The story is that I have a big sister and she was playing violin. When I was five I was waiting at the music school while my sister followed her violin lessons. There was a man coming out of one of the classrooms and was very nice to me, saying “Oh, nice little boy!” One day my mother asked me: “Do you want to play an instrument?” Yes, but with this man who was so kind to me. That was by accident the cello teacher. 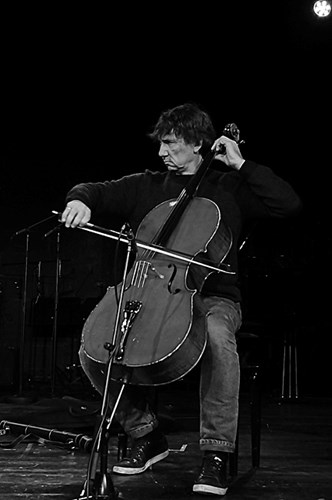 Could you describe the special affinity between the more or less deep sounding instrument and your person please?

VC: I don't know. I am nor sure. The cello is just like a tool for me. I could have played another instrument but I love this instrument. It is a choice. Maybe there is an affinity but I don't really know.

Would you agree or disagree that the cello is a not so common instrument in jazz?

VC: Less and less. When I started to play jazz and improvised music I was 18. There were only a few cello players around and they were outsiders. We had to push hard and tell everybody that we can be a band member and play jazz. It was not so easy. Now it is more naturally. There are more and more young cello players around. That is great and they play in a lot of bands. In every second band you see a cello player I would say. The cello is a special instrument you can do a lot of stuff with it. In a band the cello can claim a very important place because you can open up a different world of sounds. 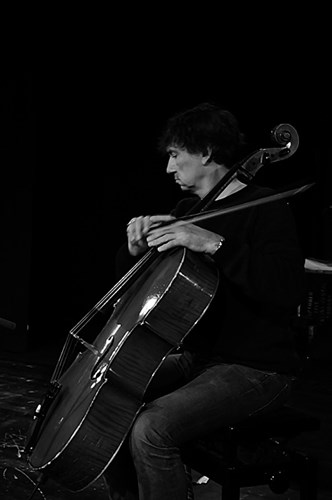 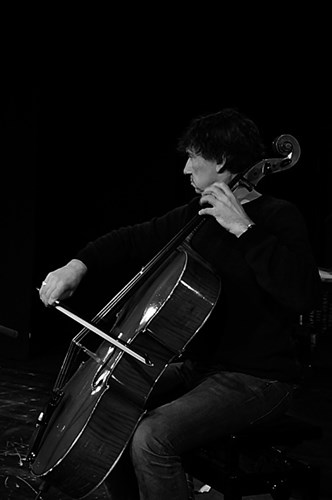 Do you remember the first jazz album you heard or got as a gift? If yes, would you name it please.

VC: Of course. My father collected Louis Armstrong and Glenn Miller records and listened to them at home. I did and do not really like the music. I attended courses of classical music at a music school. At that time I went to a special audio library where you could rent records. I took the LP's for one week, came back and took the next load. I went there for getting records with classical music, rock and pop. One day, I don't know why, I went to a new section of the library, the jazz section.
First of all I looked for the very nicely designed covers. Wow! I didn't know a single jazz musician. I didn't know anything about Miles Davis. I was 15 in those days and classical music, and rock music as well were my cup of tea. I picked the LP's with the nicest cover and the first Jazz record I selected was “Bitches Brew” with an incredible nice cover. I listened to jazz from different periods and styles like Duke Ellington, Thelonious Monk and Weather Report. In the beginning I did not know a thing. What I did was recording the tunes on tapes though it was forbidden. I recorded what I didn't like too. I didn't like an album by Eric Dolphy but I said to myself that I might like it one day. Few years later I listened to it and found it great music. Until now “Bitches Brew” is still the most important album considering my life as a musician.

How deeply are you rooted in the European classical music?

VC: When I started to play jazz I didn't want to hear classical music any longer. I played the cello with a bow and I wanted that it sounded like jazz music, like Jean-Luc Ponty. I tried to avoid to be connected to classical music. During the New Jazz Meeting at Baden-Baden I had the opportunity to play with Dominique Pifarély (violin) and Joachim Kühn (piano). It was like a Schubert Trio but with free and improvised music. I suddenly started to play improvised music and real cello music with a big sound link in the classical music. At that time I was something like 29 and it changed my point of view. I started to mix everything and being a complete cello player and not only a jazz cellist. 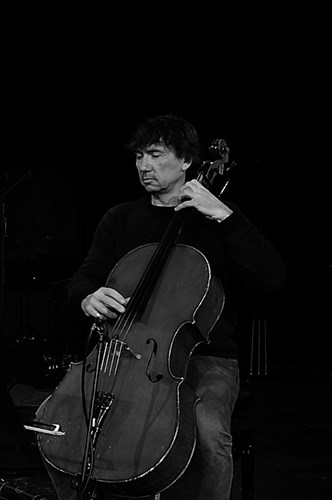 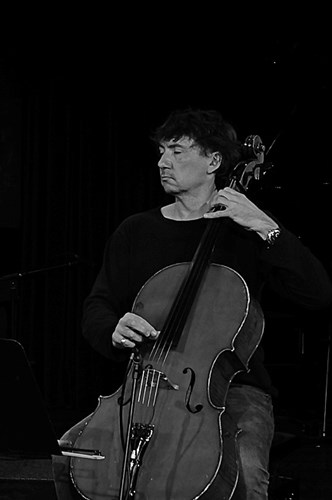 How important was and is the influence of rock and pop for your career? When I listened to the composition “West” I thought of “Tubular Bells” and similar tunes right away. Mislead? Misconception? Cliché?

VC: It is my culture. When I was 12, 13, 14, 15 I always listened to that music.  I try to find a way of writing and playing music which is solely my music. I don't care about aesthetics and styles. I don't want to copy styles of music. For me it is the question: “Is it really what I want to hear? Is it really my music?”. Some people like “West” because they see it as rock music other as folk music. I don't know. I try to compose music which is in my soul. Well, jazz is the music I know best but jazz has to be lively and not dead music. It is not a music with a certain repertoire. Jazz has always been influenced by everything. Now and then I get the feeling people play jazz inspired by jazz but that doesn't work. Jazz has to be inspired by various music genres.

Do you intend to tell a story with your music? It sounds to me as if you would present narrative music pieces considering your latest album “West”.

VC: Indeed but it is more for me. When I wrote the music of “West” it was the idea of another place. When people are going to discover a new spot they are always going west. West means for me looking for a new place, travelling to a new place, playing new music. It has always to do with the horizon and what is beyond it. I am from Brittany and I am truly a fisher man. I like to be out in the sea. I am sailing in my boat and there are some dangerous places you have to pass to arrive at another spot. “West” is my most personal album and the audience likes it very much. A lot of musicians are involved in “West” but there is only one tune we play as a quartet. 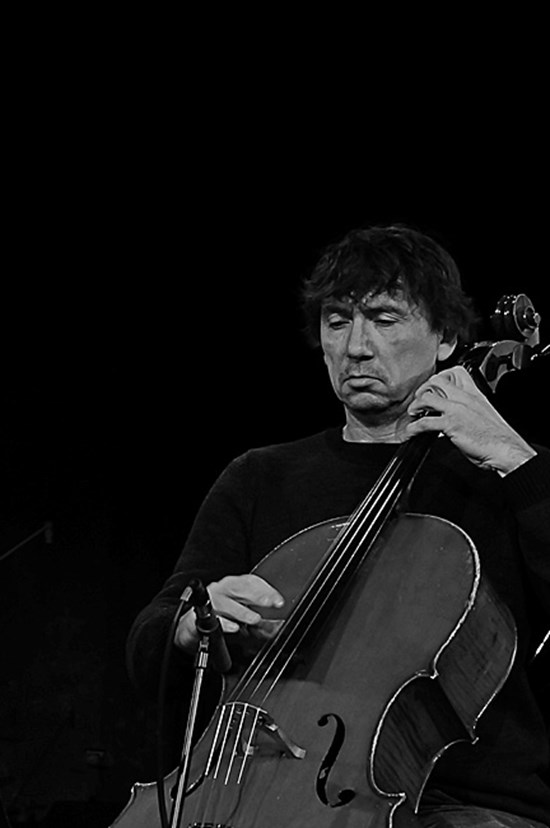 Could you describe the source for your composition please e.g. “Nowhere”

VC: That is a special tune I wrote for my son who is 22 now. He is a filmmaker. He asked me for the music for a student movie. The title was “Now Here or Nowhere”. For me it was really nice to do it either “Now Here” or “Nowhere”. I wrote a little piece of music which developed into another tune. That is the first time I played another instrument than the cello. I played a very simple instrument we call it guide-chant, a small harmonium with two octaves and a sound similar to an accordion. - Since many years I am thinking of silence. I released an album called “What do you mean by silence”. When you play in a duo the silence is always there and that means you play as a trio. The silence creates the landscape in “Nowhere”. 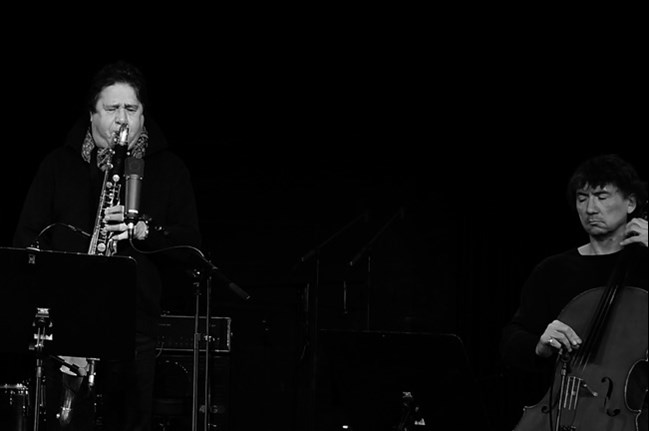 You play with different musicians in various groups e. g. with Daniel Erdmann and Robin Fincker two saxophonists. You form a duo with Louis Sclavis as well, again a saxophonist and a bass clarinet player. Do you think the aural colours of a string instrument and reeds are matching?

VC: Yes, the tenor saxophone is for me the brother of the cello. It refers as well to the bass clarinet. You can play the cello like a violin, a little bit like a guitar. The bass clarinet can be sometimes a bit like a bass. Sometimes the clarinet takes the melody or the rhythm. When I formed the Trio with the two reeds I wanted to play with the same kind of instruments. I played as well with a quartet, vocals, drums, trombone and me as a cello player. That opens a lot of possibilities. For the trio I wanted the opposite: everyone should be in the same range. A trio like this can be like an orchestra. 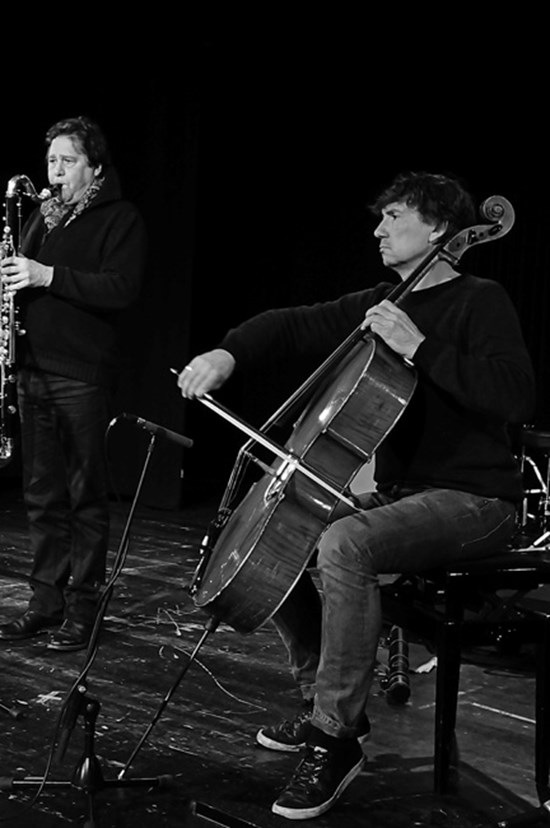 Playing in a duo seems a challenge because you have to be focused and concentrated all the time. There is no space to relax or lay back like in a quintet or tentet. Is that correct?

VC: Yes, that is what I prefer, a duo or trio. We have to be connected all the time. With Louis I played so many times and we know each other for so many years. We have a very strong bond. Even if there are minor mistakes during the performance it doesn't matter. It's cool. 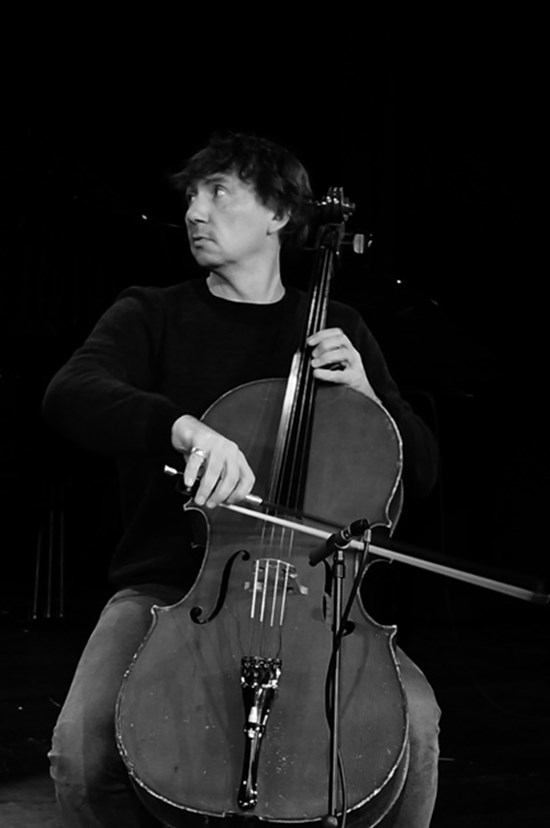 Thanks very much for the interview.