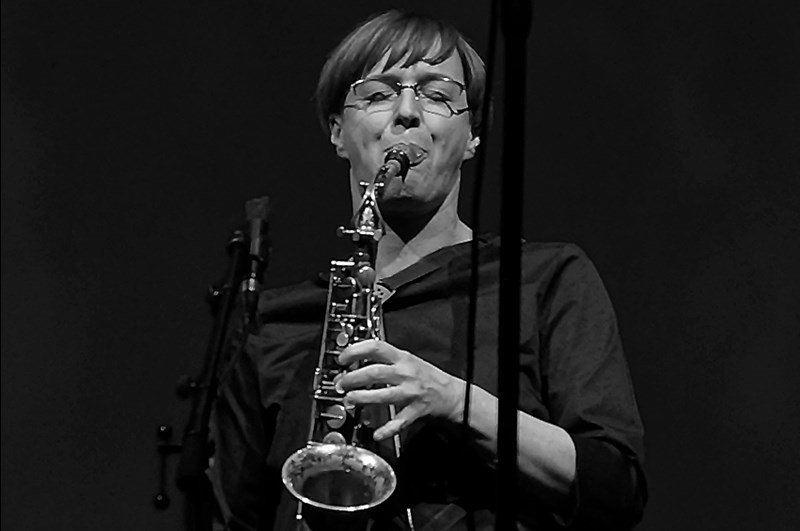 Silke Eberhard originally from Heidenheim (Baden-Württemberg) is based in Berlin. She is a saxophonist, clarinettist and composer. Quite often she performs side by side with Jan Roder (bass) and Kay Lübke /drums). Apart from this trio she formed another one named I am Three with the trumpetist Nikolaus Neuser and the drummer Christian Marien to record Mingus tunes at the Leo record label. She acts as a bandleader for the wind quartet Potsa Lotsa that is focused on the compositional work of Eric Dolphy. Last but not least she plays as well with her septet Potsa Lotsa Plus. For these latter projects she is surrounded by Jürgen Kupke (clarinet), Patrick Braun (tenor sax & clarinet), Nikolaus Neuser (trumpet), Gerhard Gschlößl (trombone), Marc Unternährer (tuba) and Antonis Anissegos (live electronics). She works together with Ulrich Gumpert in a duo formation and she created another duo with the drummer Alex Huber. She has recorded with well known musicians like Aki Takase, David Liebman, Wayne Horvitz, Dave Burrell and Gerry Hemingway. Last but not least: She won the German Record Critics Award for her album 'Potsa Lotsa Love Suite Plus plays by Eric Dolphy' in 2015. 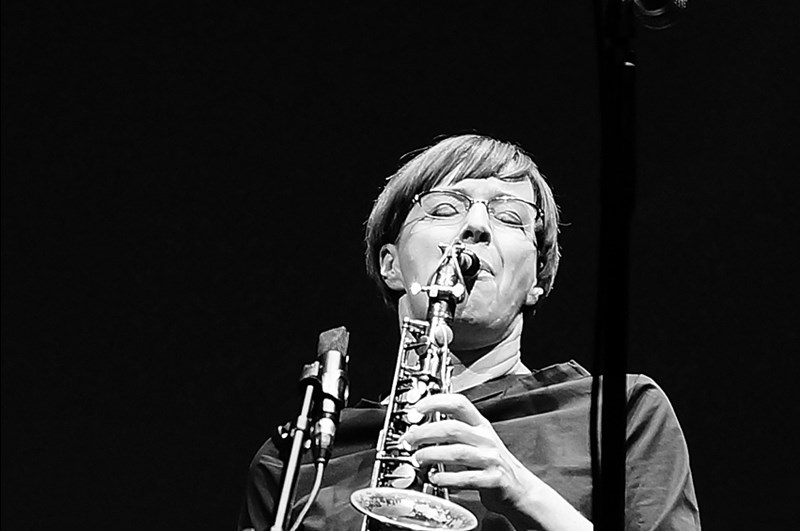 How important was music during your childhood? Have you been surrounded by music because your parents played the piano or take part in a choir? How essential is it for starting a career as a musician that someone is confronted with music at an early age?

SE: Yes, I was surrounded by music. My father was and is a great clarinetist but he did not choose a life as a professional musician. He played in his own quintet and was the conductor of a local brass band. It is quite common in the southern part of Germany – that's where I come from – that every village has its own brass band. It is very important for the social life in those places. The band usually plays traditional Bavarian and Swabian folk dance music e. g. Waltz and Polka. I remember that I was maybe three when my father took me for the first time to a band rehearsal and I enjoyed it very much.

Did you start to play clarinet and saxophone at a very young age? Or did you start with English flute or piano instead?

SE: I played the recorder (i. e. English flute) in school but I wanted to learn to play guitar. But I got a clarinet as a Xmas gift instead when I was eleven years old. That is not that young I have to admit. My parents did not push me  to play music too much. Music was just part of our daily life. My father was my first teacher. I joined the brass band. It was not a typical German marching band. There was a proper set up with a conductor, clarinetists who played the more difficult parts and horn blowers for the melodic lines. Anyway I had to pick up the clarinet because it was a present I could not refuse to take. I thought why not and I tried it out. After some weeks playing clarinet I really enjoyed it but it was hard for me as a child considering the technical aspect by closing the valves properly. But I was more and more fascinated by the saxophone when I heard its sound.

Well, you picked the saxophone and clarinet as your instrument. Do you see a relation between your personality and the sound of the those instruments?

Do you think the saxophone is very much related to the human voice?

SE: Some people would totally disagree but I would say the saxophone is possible the closest instrument to the human voice. When you sing the sound is produced in your throat. The mouthpiece of the saxophone with the reed is inside your mouth and between your lips. The reed is doing what the singer does with his or her voice. 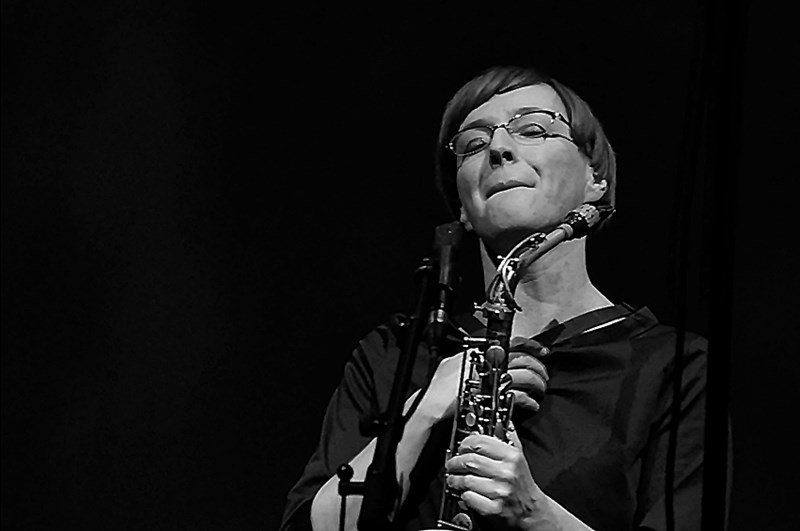 Do you remember the first Jazz tunes you heard?

SE: (With laughter) 'In the mood' by Glen Miller. That was a record my parents got.

What type of Jazz did you discover later on? Bebop? Modern Jazz? Hard Bop? Avant-garde? For some of your recordings you picked tunes by Eric Dolphy and Charles Mingus, legends in Jazz so to speak.

SE: The next step after Glen Miller was the discovery of the Big Band sound because I played in a Big Band. I enjoyed that very much because I like the multitude of horns in such a band. I attended once a concert at Heidenheim with Engstfeld/Plümer/Weiss, quite famous German musicians and for some younger musicians role models. Lee Konitz came to town and I listened live to the Brecker brothers. After those musicians I came across Ornette Coleman. I have to admit that I listened to everything I could.

You play in a duo with Ulrich Gumpert. You formed two different trios e. g. I am Three playing Mingus tunes and you play in a septet. Are there any favourite band formations and what makes the differences regarding your position in the bands?

SE: The Mingus trio is not my trio but a collective. That is most important to know. To interpret Mingus was not my idea. People mostly think I am the leader of the trio because I had done Dolphy tunes and Coleman compositions as well. So Mingus fits perfectly into the story but is was the idea of the trumpetist. Actually there are three bands I lead: my trio and Potsa Lotsa quartet and septet. Potsa Lotsa is all about Eric Dolphy and some of my own compositions. There is a specific line up with only horns and a bit electronics, too. I would say I really enjoy all of them and I need the variety. I get inspirations from all theses different bands and various co-musicians. It would be great to play 60 concerts with one band alone. But playing with one band would be quite hard for me, as well. I like to be influenced by others too much. The septet is about the music of Dolphy.

SE: He is one of my heroes! I play now for ten years with my trio and it is focused on my own compositions. It is my long time running project and the most important one concerning me as a composer. Dolphy is like a very good friend and inspiration for my own tunes.

Would you say that playing Dolphy is playing maybe 20% themes of him and 80% are improvisation, variations and arrangements?
SE: It is hard to say in percentage. I arrange everything. If you do not play with a rhythm section in the line-up you have to arrange the tunes.

I am Three is a bass less Trio regardless that the tunes you arranged and play were written by a bass player. Who is playing the bass lines?

SE: All of us! We use the tunes as skeletons and each of us knows all voices.

Do I get it right that a deep sounded instrument like a double bass is not essential? I would assume substituting a bass means you need a bass clarinet or a baritone or bass saxophone.

SE: We just chose that line-up and play the music of Mingus. Our drummer can play deep tunes with his bass drum. When we played in Belfast ten days ago someone said that we sounded like an orchestra.

The other trio is a classical formation but the piano is substituted by your alto saxophone as the lead instrument. Do you see any limitation considering tunes you play or the style of Jazz or the subgenre of Jazz you can present on stage?

SE: I don't see that. It is just the imagination of the sound. You work with the line-up and by playing you create a sound.

I would like to hang on to Mingus for a while and quoting him: 'In my music, I’m trying to play the truth of what I am. The reason it’s difficult is because I’m changing all the time.' Fair enough, but how can you play Mingus' compositions then?

SE: I am not quite sure what he wants to express by saying that. There is a tune like 'Orange was the colour of her dress then blue silk'. It was not recorded very often but that tune saw some changes. I listened to the recordings and compared them and then I thought he had done something with the tempo. In one version the trumpetist plays the melody, in another the piano player does it and the horns do the accompaniment. The melodies are still the same but in a different shape. That is actually one of my favourite Mingus' songs! The rhythms are changing all the time. You have a very bluesy line and suddenly two bars of Latin. The forms are not eight but I forgot what they are. Parts are free blowing. Everyone of those interpretations is so different. I like that! Miles Davis had the same attitude and approach as Mingus because he played tunes for many years and changed them now and then. 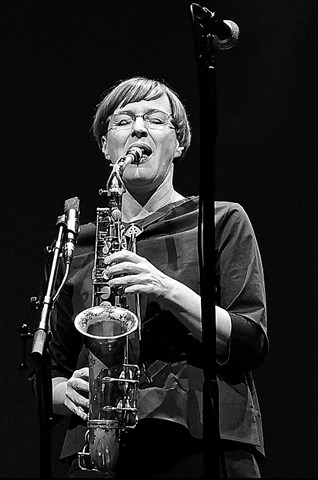 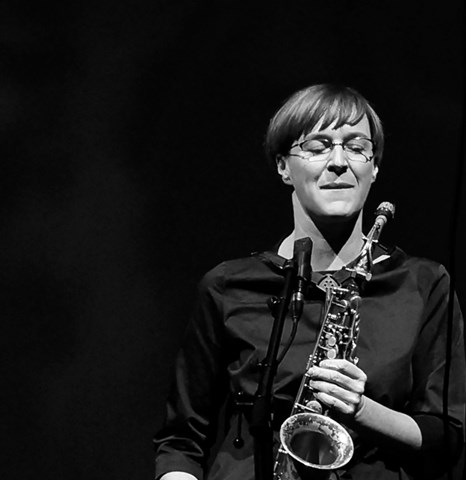 Another quote: 'Anyone can make the simple complicated. Creativity is making the complicated simple.' Would you agree or disagree? Is that the way you play?

SE: Yes. I like the statement. It is just true.

Do you think Mingus' compositions can be followed easily and are not very intellectual?

SE: If you look at his scores you have tempo changes, you have cord changes – wow – and the forms are not even. Those tunes are not easy to play but they sound pretty easy. That's really quality.

What type of Jazz do you perform with your own trio with a 'missing piano'.

SE: We play my own stuff and the line-up is a classical saxophone trio like Sonny Rollins trio or Ornette Coleman trio. To describe the music is quite difficult. I would say it is contemporary Jazz but as well rooted in the 60s. That is a time when Dolphy, Coleman, Mingus started something I would like to carry on.

How important is the tradition of classical European music then taking the contemporary Jazz in Europe into account?

SE: Do you think of Mozart, Beethoven and others?

Yes, I quite often I ask European Jazz musicians about the European roots. American Jazz musicians always refer to Jazz as their native language even when they are white Americans and not Afro Americans. Jazz in general is black music developing from the Blues and Swing into all the subgenres we know today.

SE: It is just there but I do not think about it too much. I went to the clarinet lessons and played Mozart and others. I really enjoyed it but today I don't thing so much about it. Today I enjoy more the composers of the 20th century.

Thanks for talking with me. 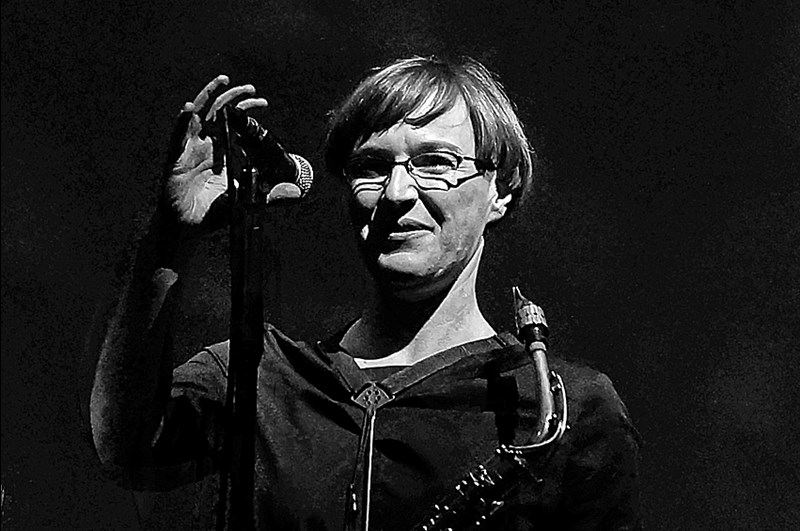