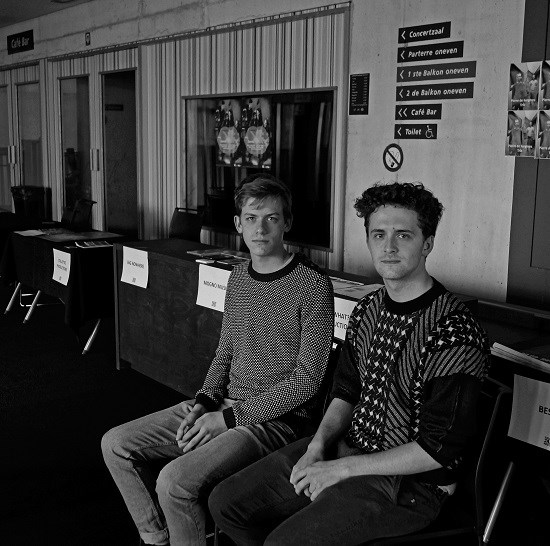 I met Hendrik and Casper during the Belgian Jazz Meeting 2015 and interviewed them about their project named “Schntzl”. 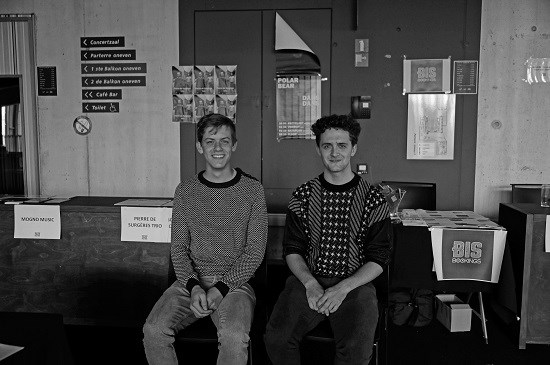 First of all I would like to pay attention to the band name? Why did you pick such an unusual name and did not care about the spelling? By purpose?

HS: Casper and I make a lot of jokes. In the beginning of our life as musicians we played in bigger groups together and we had always the feeling that most interactions were between us and less with the other members of the bands we played with. Therefore we decided to play as a duo. We just wanted to play one gig at a café without any preparations beforehand. That means live improvisations. The concert did not take place. For the concert we named us “Schntzl and Chapeluur” (i. e. the Breadcrumb coating of the Schnitzel!) but decided later to cut out “Chapeluur”. We just removed the vowels in “Schnitzel” because if you search now for Schntzl at Google you find us and not the recipes for Schnitzel. 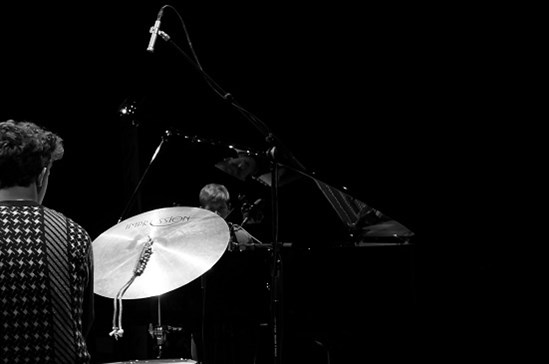 Turning up as a duo is quite remarkable because it is a very intimate and a very close relation. There is no chance to hide and you have to be present every single second. Is this a challenge and why did you choose to pair instead to form a Septet or Quintet or Trio?

HL: For sure, it is a big difference. If we play as a duo I am pretty exhausted after one set. It is very intense considering the concentration. If you play in a bigger band you can just listen to someone's solo. It is okay if you do not have to act yourself. The concentration in a duo is on a much higher level. 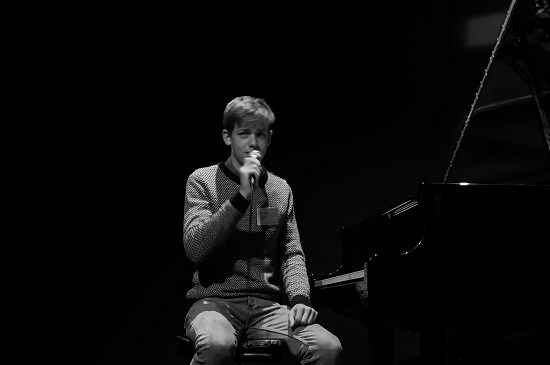 CVDV: The bass drum has more impact on the performance as a duo if there isn't a bass player on stage. The lower registers comes from the piano playing bass tunes or from the bass drum. It is quite a different kind of making music.

HL: I also have the feeling that the drumming can be more melodic if there is not a bass player around. I see the drums Casper plays more as an melody instrument. It is never accompanying me at the piano. In the duo we play with each other. It is never my solo and he supports me. It is acting and re-acting. Nobody of us can be replaced in our duo. 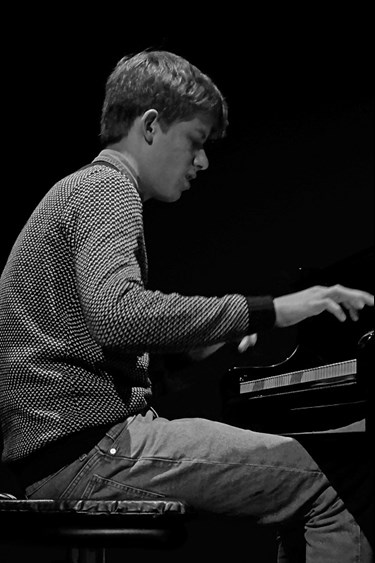 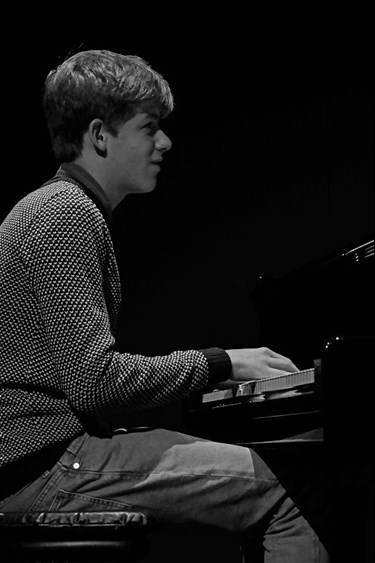 Let us talk about the music you perform: How would you characterize the tunes? Minimal music, Post-Bebop and so on?

CVDV: That is a tricky question. Maybe Minimal music is quite okay in describing our music.

HL: I do not like if I or other musicians play lots and lots of stuff. I just prefer to play five notes in their right place and give us space to play.

CVDV: Uff, to label it seems quite hard. Minimal? Experimental?

HL: We both based in Jazz music but do not like to be locked into a certain sub-type of music. It is always like this: I present a melody and Casper might ask: 'What shall I do?' In the end we find something which works. Thinking about the label for the music comes after we had played the tunes. I think because they called the music minimalistic has to do with the compositions. They do not fill five pages, never. It is always a very reduced idea and then we try to play it in a free way. Every time we will play it it is completely different. The composition is just one powerful idea. 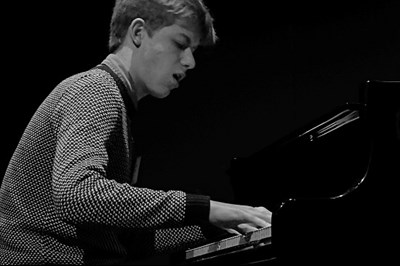 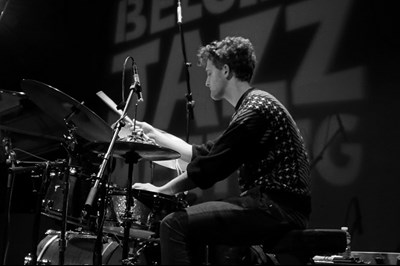 I would like to talk about „Improvisation of the Nation 1“ with a distinctive bass line. Does the type of music suits you most?

Would you agree that you are a story teller considering the harmonies and choruses of „Vluchtigheid“ for instance?

CVDV: Often we find the title after we had completed the composition itself. Most of the time the title is just picked by random and the title captures the mood.

HL: There are some tunes which have a specific story to it but “Vluchtigheid” is not one of them. When I got the idea for this piece of music I was sitting in a car and got bored. I opened a music notating program and filled in a bunch of random notes. I did not know how it would sound. I brought this notation to Casper and we tried to play it. We rehearsed it the whole day and then we performed the composition. It failed completely. Then we rehearsed for two days again and we tried to play it. It is more composing by random. 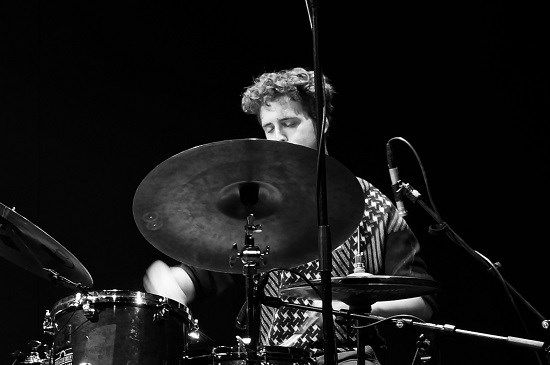 For your bachelor degree you played with a quartet titles like “Wanabe Blues”. Could you explain the idea of this composition and its structure please?

HL: For the concert to get your degree you have to play a blues and a rhythm change plus a piece the teacher had written. I wanted to write a piece of music matching with the music I had in mind and had something in common with the blues. “Wanabe Blues” is my interpretation of a blues but has nothing to do with a blues and 12 to the bar. Actually it is not a blues at all but has some functions related to a blues.

You composed a solo title called “Koffie en Gemak”. Does that mean having a coffee in one's own time?

HL: I think I wrote that in the morning after drinking a cup of coffee. It was one of those Sundays and you're super happy. I sat down and found something super simple I wrote down only six chords in a row. Then I searched for a title. I was still drinking coffee and eating pastry which is Gebak in Dutch but I called it “Koffie and Gemak”. Gemak means at ease. 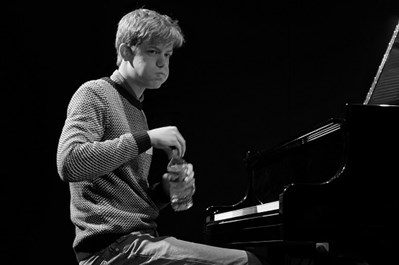 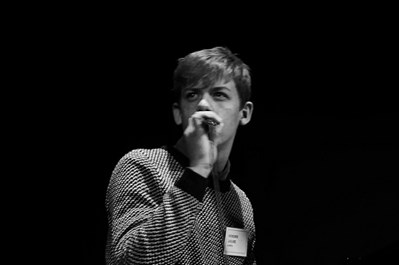 When I listened to this composition it sounded a bit like chamber music. I guess this was not the intention.

HL: Yes it was the intention. Chamber music is a very nice term for what we try to do. We try to play more quiet music.

Tell me more about your projects.

CVDV: Yes, but mainly for one concert only. What I like about Schntzl is the fact that we don't arrange a gig and then rehearse for the gig. No, we rehearse as much as we can.

HL: Before we performed the first time we rehearsed a whole year. We rehearsed and rehearsed until we had the feeling that there is something we can show in public. 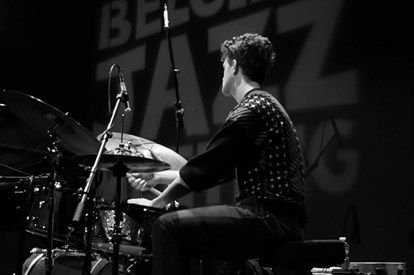 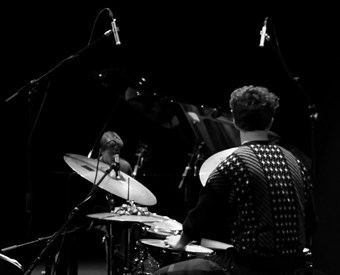 Apart from Schntzl you, Hendrik, took part in a Mingus project by Francesca Palamidessi.

HL: Yes, we will play together pretty soon again because Francesca won an award as female vocalist in Poland. Now she signed for a new record deal.

Are you a sideman or a member of Francesca's band?

HL: I am a sideman because Francesca is telling us what to do. I like that very much because she has a vision about the way the tunes should be played before the rehearsals start. It is like helping somebody else to realize a project. 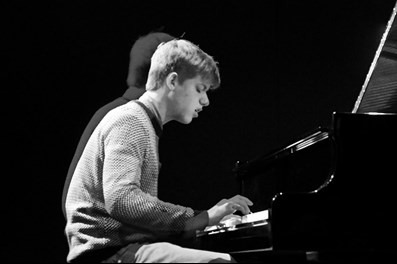 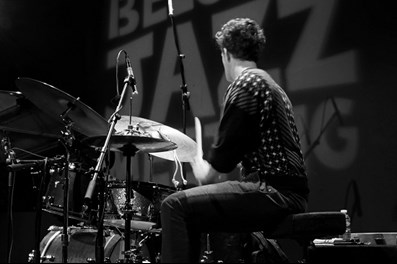 But Francesca's music is contrary to your own music. Am I right?

HL: Yes, the Mingus project is very traditional and actually I do not play much 'real Jazz'.

Thanks for the interview and all the best for the future. 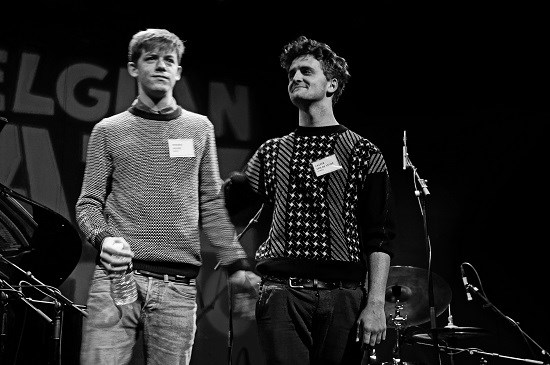