Raise Up the Ukulele: New Music from Stephen Godsall Tells Us Why 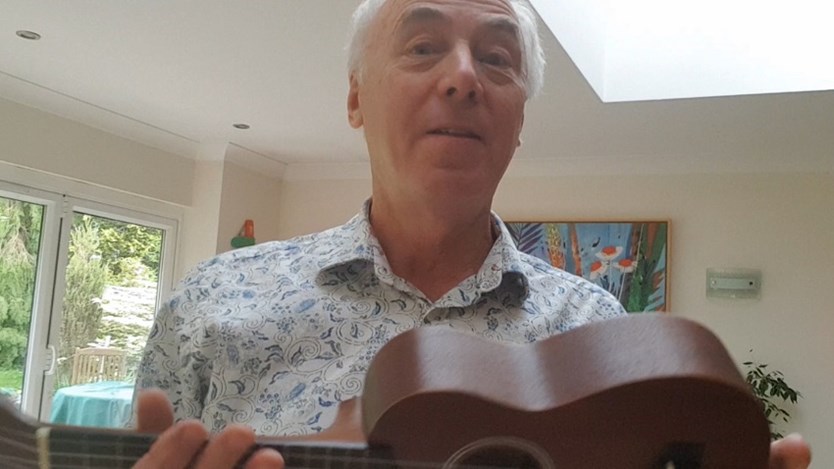 Throw out what you thought you knew about the ukulele. Yes, it can be quaint, charming, a wanna-be, higher-register guitar in miniature. Enter Stephen Godsall, who has set out to play the uke to its fullest potential, funkifying it, making it swing like gypsy jazz, riffing out in hearty solos.

His latest work, Ukulele Forms Vol. 1, will be released next month on the Jazz'halo label and it flaunts all uke conventions. From the pensive, sweet and sunny “West Pennine Winter” to “One Thing (Ukulele Roadtrip)” that has a cool hook and a lift like “Guantanamera,” Godsall has proven beyond any doubt that this instrument is fit for all the things, and jazz is certainly one of them.


What about the uke lends itself to different genres - do you think it is its sound, the tuning, or just that it’s small and easy to handle?

What’s special about the ukulele is the sound – it’s subtle and tightly focused, which is emphasized by the traditional tuning of the fourth string to a high G. That means that both chords and arpeggios tend to produce “close harmony” compared to the guitar. The mandolin has wider intervals between strings so creates more “open” chords. I love what Chris Thile does with mandolin in lots of different genres; the uke is equally capable and there are now so many great players around. It can play jazz, classical and bluegrass equally well and electric versions work brilliantly with effects.

The size also contributes to the sound and makes the ukulele convenient but for me it makes it harder to play than guitar unless you have small hands.


Speaking of tuning, do you tune it any differently depending on the genre you are playing?

I use either the traditional “re-entrant” tuning with a high G string or the low G if I need lower notes. It’s sometimes useful to tune a tone lower so it’s easier to bend strings and a capo raises the sonority nicely.


You seem to have a lot of fun with the music. Is this something you think young musicians need to learn; are they inundated with serious study and etudes and scales when it should be more organic?

Very much so, although etudes can be fun too! There needs to be a balance between hard work and enjoyment and often the best way to find that is by playing with other musicians. Fun and humor lit up most of jazz history but maybe we’re all too insecure today and anxious to be profound?

When I put this EP together, I played it to Jos Demol (Jazz'halo label boss) and asked if he thought it was too “light.” He said no, there’s always a place for music that makes people feel good, and why should jazz be left out of that? It is hard work being a musician but it also needs to be joyful, light as well as shade.


What stays with you today of your early music training?

I first learned on drums, which may be why I often use the ukulele as a percussion instrument. Singing in a choir was also important; that’s why I think in counterpoint. My first paid work was playing ukulele banjo. The banjo version cuts through more easily with a band but now I prefer the more lute-like tones of a ukulele in mahogany or spruce.

I studied classical guitar. The technique transfers well to uke and there are some fine players composing and transcribing in a more classical style. Paul Mansell and Samantha Muir are two of my favorites in the UK.

Talk about writing the music for your new CD. What inspired each track, and the album as a whole, AND the name of the album?

The album is called “Plucking the underdog” because I think of the ukulele as under-rated; it’s a reference to the Charles Mingus autobiography 'Beneath the Underdog'. Mingus was a visionary in the way he wrote altered blues forms and the title track tries to emulate that. It’s also called “Ukulele Forms Volume 1” because this is the first of three EPs I’m planning this year exploring different ukulele jazz idioms.

It all started when I bought a cheap ukulele for a wild camping trip – I fell in love with it and was amazed at how well it records and how expressive it can be. After trying out uke-based pieces in several jazz idioms I thought of the album “Guitar Forms” by Kenny Burrell and had the idea of attempting something similar.

Track 1 “Plucking the underdog” is inspired by Charles Mingus and Thelonious Monk. All the percussion is also played on the ukulele. The top lines are a dialogue between ukulele and banjo, another instrument that tends to be underused in modern jazz. The superb album of duets between Chick Corea and Béla Fleck “The Enchantment” shows what’s possible.

Track 2 “One thing” is based on a road trip across Africa by my friend and ace photographer Paul Close; along the way, he took portraits of people he met and asked each of them “What is the one thing that would make your life better?” The lyrics are based on their responses. Orchestra Baobab is a favorite of mine and this music owes a lot to them. You can hear the contrast between the Kala soprano uke on the left channel and the Flight tenor uke on the right.

Track 3 I used to live on the edge of the West Pennine Moors which are particularly beautiful under snow; this piece aims to evoke those big skies. “West Pennine Winter” was written for Paul Mansell’s “The Ukulele Sessions,” originally for solo acoustic ukulele, then I overdubbed some orchestral type sounds and percussion, all played on a Flight tenor electro-acoustic ukulele.

Track 4 “Piglets” is a crazy fusion of Gypsy jazz and electropop, written as a celebration of “pannage,” the autumn tradition where piglets are set free in the New Forest to eat acorns.

Track 5 “Uke-o-tronics” explores the electronic ukulele with 18 different electronic treatments, one riff and one ukulele.


Talk about the other musicians on the album and what they bring to the overall vibe.

It’s mainly a solo album with multi-tracking. There are ukulele parts for tune, background, electronics and percussion. I also play drums, bass and banjo. There are no guitars or keyboards. Ukulele covers all of that territory.

On one track I’m joined by Laura Taylor on vocals; she used to sing with the National Youth Jazz Orchestra and I’m currently recording a full album with her. Len Hurst also plays saxes; he’s a veteran of the RAF Big Band.


Your dream ensemble would be…?


Advice to newbies about the business, creativity and composing?

I think Devon Sproule captured it well in her song “The Warning Bell”: “I’ll work awhile in music, ’til my money runs out, I don’t mind the driving and I quite like the crowd.”

The business side is hard; you do it because you love the music and there’s no plan B. Compose every day, even if it’s a short sketch. I have hundreds of sketches so I’m never stuck for a starting point. Coincidentally all the pieces on the EP start with 10-20 seconds of material from the original sketch which I’ve then built into a longer piece.

Get yourself a compact recording setup; find a supportive partner and cherish them.


What is the jazz scene like now where you live?

I’m going to be optimistic; the scene is becoming leaner but stronger! Some venues, clubs and festivals have gone after Covid; some stalwarts of the scene decided it was time to “retire” sadly, and some pubs and bars are so short of money that they’ve switched to “open mic” or jam session evenings rather than paying musicians. Brexit has also had a negative effect on the UK scene; fewer European musicians coming here and fewer UK musicians going to Europe – and sending CDs to any address in Europe is now a nightmare due to Customs charges. The upside is that remaining musicians and venues are becoming more determined and working together more, and audiences have missed live music and are returning.


What are some of your favorite collabs?

Last year I worked remotely with my “dream band” from around the UK to make the album “We could fix everything.” It featured Mike Hall on saxes and bass clarinet. He had a lot of input on arrangements and concepts and set the bar very high for improvised parts. Steve Waterman played trumpet and flugelhorn and was amazingly quick and accurate at turning parts around, so the ensemble sections tended to get built around his playing. Around half the tracks included Sara Harris on vocals and she was so good at fine-tuning the vocal lines and helping out with lyrics when I got stuck. My brother Andrew played drums and Joe Limburn played double bass. Although I wrote all the pieces, the improvised sections from everyone influenced the final form of each piece; for example, sections were extended to fit in great solo work.

The other surprising collab is happening right now and it’s with Jimi Hendrix! I’ve used remixing software to separate his vocal and guitar parts from a range of recordings and hearing them in isolation brought home how creative and visionary he was. Some of his live guitar work is absolutely free jazz and way ahead of its time. I’m using the parts to assemble new songs – “granular” sampling allows me to change the speed and pitch in real-time. It’s quite a jigsaw puzzle but I start with his lyrical ideas plus some extracts from interviews. I then play a drum track to these, overdub phrases of his guitar work and finally knit the whole thing together by playing a bass part. I’m putting the finishing touches to 4 tracks to be released on EP shortly; the result is very different from anything I would produce on my own, in the same way one composer might create variations on a theme by another. 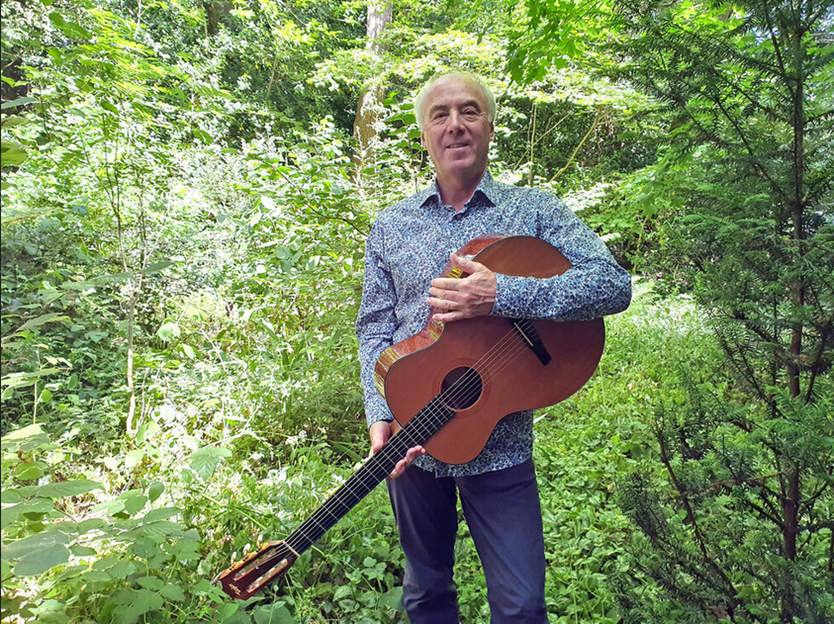 I’d like to mention Bandcamp; it’s a great place to find new music of all sorts and it’s one of the few places to give musicians a fair deal and a chance of getting a financial return for their recordings. Like all online platforms, it takes a while to find your way around but it’s worth it. Spotify has around 150 million paying subscribers whereas Bandcamp has around 37 million visitors each month and sells 5 million albums per year. It’s free to use for listeners and the free artist account is fine for most musicians.

In these challenging times it’s also important to appreciate all the people supporting music; people like you Debbie who help to spread the word, promoters of gigs and festivals who often take more financial risk than the return justifies, and online playforms like JazzHalo who rely on a lot of voluntary work.