Kjetil A. Mulelid Trio: ‘We don’t want to sound like another piano trio!’

On June 8th, Kjetil Mulelid Trio – Kjetil A. Mulelid (piano), Bjørn Marius Hegge (double bass), Andreas Winther (drums) - made its debut on Belgian soil (27Bflat, Bruges). About an hour before the musicians took to the stage, I had the pleasure and the privilege to sit with them in the sun-drenched garden of the venue where the three of them listened to and in a charming way answered my questions. 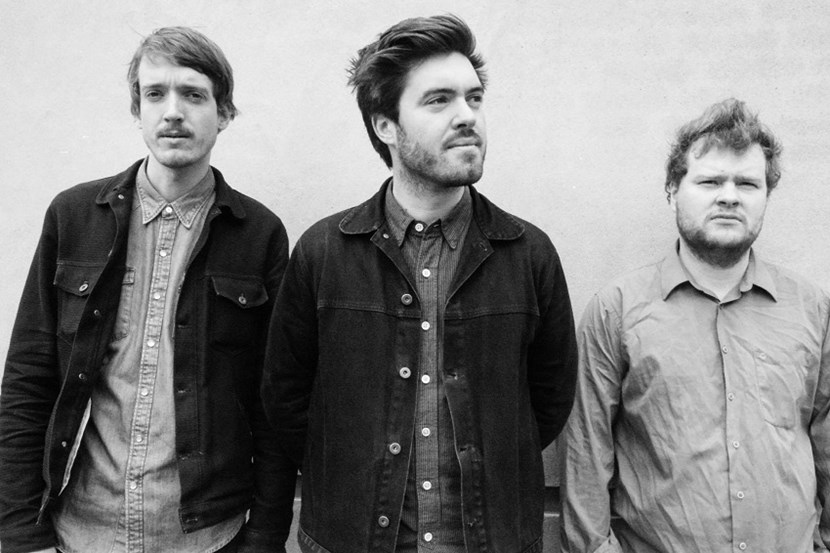 Let’s start with a short history of Kjetil Mulelid Trio: how long does this band exist?

Kjetil: ‘We’ve been playing together for a little more than a year, but we already knew each other well before we started playing because we’ve all studied at the Jazz Conservatory in Trondheim, although not in the same class. So even before the Trio was founded, Andreas, Marius and me had lots of conversations. Also, we all played together with one another, in various combinations:  Andreas and me, Andreas and Marius. And then Andreas and me started talking about putting a trio together with all of us. To me the trio has always been the main thing in jazz music. In short: Kjetil Mulelid Trio exists since a year, so it’s really fresh. It feels cool playing with those two guys, it feels like a cool band.’

Marius: ‘It is a really cool band!’

Andreas: ‘There is a good match between us, both musically as personally. We’re different, but not too different.’

Marius: ‘There may be some friction, sometimes, but that’s what makes it exciting!’

Kjetil: ‘And we have lots of plans and many things are happening…’

I did some homework to prepare myself for this interview, but I have to confess: I actually didn’t find that much information on the internet… Apart from some very nice footage of the Trio performing in a church.

Kjetil: ‘In fact, that concert in Ilen Church in Trondheim was our first concert ever!’

Andreas: ‘‘Some friends who call themselves “Hyggelaget” filmed our performance, which was a bonus because we could use that footage by way of promotion and it worked out well.’

Kjetil: ‘In the meantime, we have recorded our debut album and it will be released next autumn (October 2017) on Rune Grammofon, one of the leading jazz record labels in the Nordic countries. After the release, we’ll be playing some more concerts, for example in The Hague and Amsterdam. Hopefully we can also play in Belgium again, and particularly in Bruges!’

All compositions are written down on paper? And if that's the case: are they from your hand, only?

Kjetil: ‘Yes, some of the tunes are written down, but when we play live there’s a whole lot of free improvisation. Andreas and Marius are two great musicians with really great ideas, so that creates the possibility and the conditions to really play free.’

Andreas: ‘When we started, we were playing more strictly, but then we realized it’s fun to play freely in the middle sections. For instance, during a performance last Monday we had no setlist, there were almost no “tunes”, it was all free. It’s great fun to test all ways of playing together.’

Kjetil:’ And to explore ourselves and the scene.’

Andreas: ‘The album, though, is more tune-based.’

Who are your major influences?

Marius: ‘I only have minor influences! (General laughter). No, seriously: for me as a bass player, Charlie Haden is the name that comes to my mind.’

Kjetil: ‘Tough question… I would mention early Keith Jarrett stuff, amongst others. But not one musician in particular, because it’s a huge mixture of influences.’

Andreas: ‘Concerning the piano trio in itself, I would certainly call Paul Bley/Paul Motian/Gary Peacock as an influence. But we also listen to a lot of Norwegian music. And to a lot of non-Norwegian music as well!’

Kjetil: ‘As a - really mixed – trio, we have undergone many influences. That’s what makes it interesting, because each and every one of us has lots of ideas about what’s cool and what isn’t.

Andreas: ‘Those influences are what makes us sound this particular way.’

So you wouldn’t consider yourselves a “jazz piano trio” in the classic sense of the word?

Andreas: ‘The fact that we play acoustic makes us a “classic” jazz piano trio; the setting is clearly similar, obviously.’

Kjetil: ‘But other piano trios do not play the same way we do. Because we really have our very own philosophy and personal way how to approach modern acoustic jazz.’ 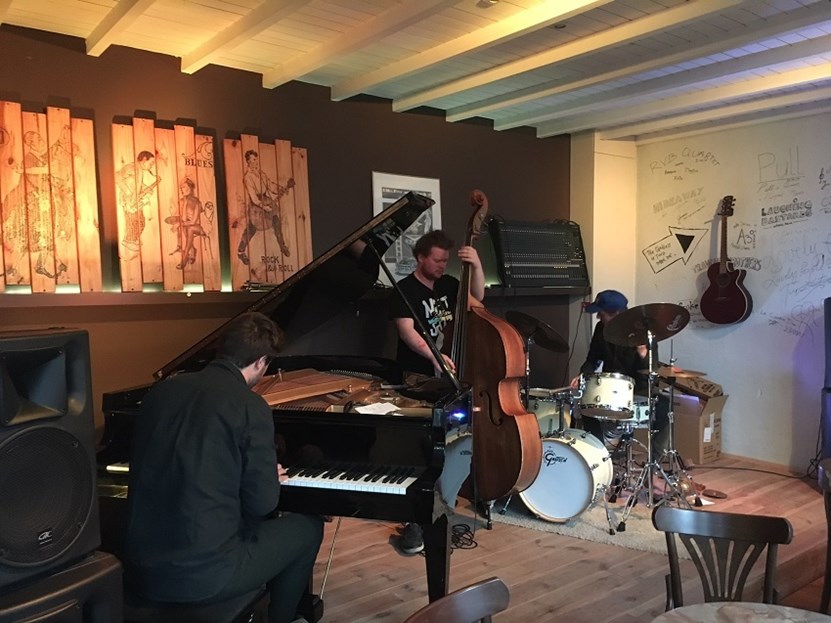 How do audiences respond, so far?

Kjetil: ‘Yesterday, in Copenhagen, the response was so strong I found it a bit shocking!’

Andreas: ‘One girl even said it was the best concert experience she’s had this year!’

Last one, before I let you off to climb the stage: each of you plays in other projects?

Andreas: ‘Kjetil Mulelid Trio is becoming a big part of each of our lives, but we all like to play different kinds of music. Kjetil and I are in an indie band, we also form an improvisation duo, we play other jazz stuff… We all have a lot different projects, for instance Kjetil’s quartet named Wako, and my band called Megalodon Collective (Norwegian grammy nominated).’

Kjetil: ‘The Trio is part of our lives, but it’s not enough for none of us to have that one band. It wouldn’t be cool if we were only in this one project. It feels fresh to be part of various musical adventures, because they’re different. But the hardest part with other projects is to plan things, to get people together because they’re all busy. However, dealing with it feels very fine. Next week, for example, I’ll play in a quartet - Wako, as mentioned before - which I've released two albums with.’

Andreas: ‘I’ll be playing in a Norwegian folk music band.’

Kjetil: ‘It’s important to keep things fresh, to be inspired every time you go on stage.’

Andreas: ‘After 3 months of other projects, new meetings with the Trio are a very different experience! Yet, from the moment the three of us get together “it” just happens.’

Kjetil: ‘And we all just agree on what’s happening!’

And then the gentlemen from Norway hit the stage… 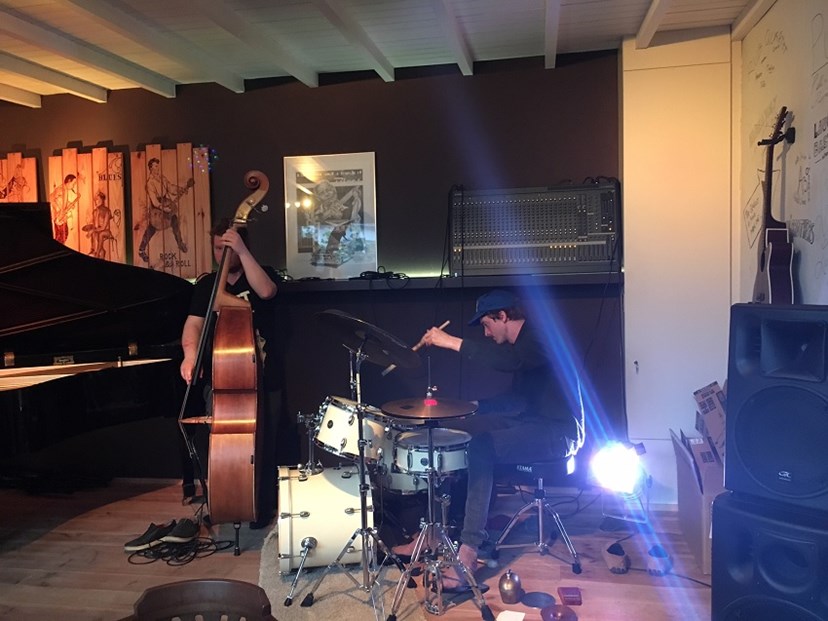 The concert consisted of 2 sets, each with long compositions, a mixture of own pieces and interpretations of known material. During the opener, ‘From Someone Else's Point of View’ - a long title for a long composition, Mulelid explained. The piano at times sounded like a cascading little waterfall. ‘Children's Song’ – again an original composition, for which Kjetil was inspired by his nephews – started as a deceptively lovely melody… that developed into a very full-term solid piece of music, with Winther proving to be a very inventive drummer, playing with all kinds of sticks and adding extra parts to his drum kit. Meanwhile Hegge really let his fingers wander up and down the neck of his double bass as if exploring the possibilities of his instrument. ‘Entrance’, followed by ‘Fall‘ (that one written by Wayne Shorter) concluded the first half of the performance. 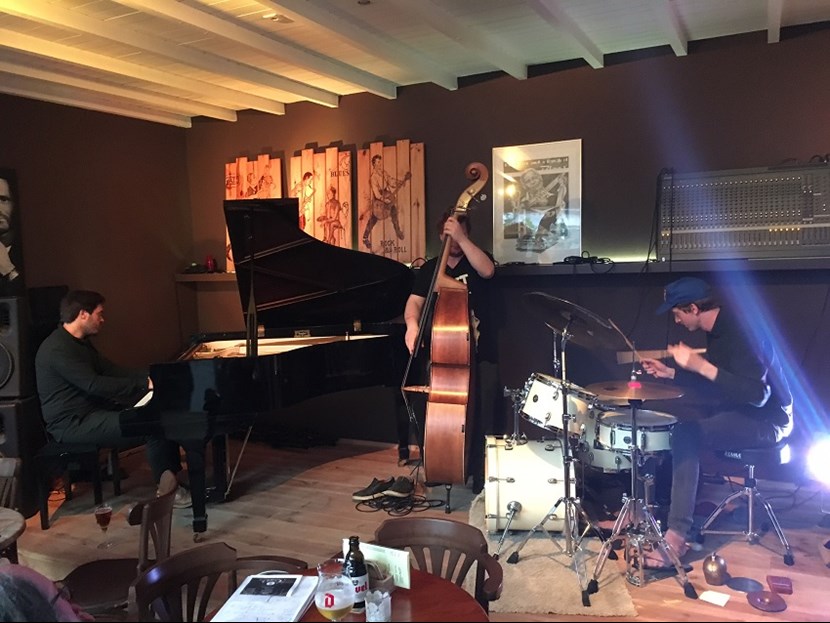 After a short break, the trio immediately charmed the attentive audience with ‘Fly, fly’, a composition that started with a long solo piece by the piano player and will be included on the debut album. On ‘You Stood There in Silence Having no Words’ Winther proved to also have very nice brush skills, while on ‘Dear Someone’ (composed by Gillan Welch) he even played with two drumsticks in his left hand. As an encore, the trio performed ‘Leaving Home’ (see video above).

Kjetil Mulelid Trio turned out to be a real treat and clearly enjoyed the concert as much as the audience did: “We really had a good time here!”, the pianist beamed with satisfaction.