Joe Fonda, interview with the American bass player and member of the NU band 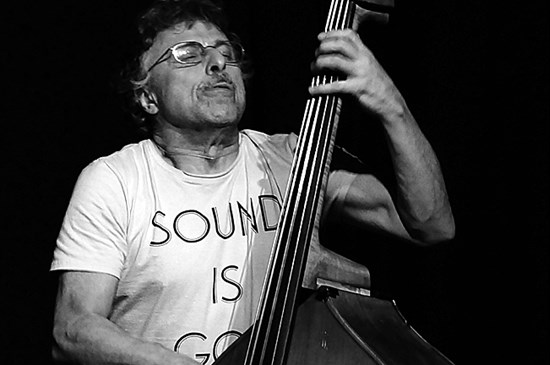 Before he was due to perform at the cuba Black Box at Münster (Westphalia) I took the chance to talk with Joe Fonda.

How important was you upbringing for your decision to learn a music instrument?

JF: My parents were musicians but they quit when they raised the family. I think it was in the DNA but it wasn't in my environment. My father actually put his trumpet away and stopped playing music. He stopped playing records and my mother stopped singing. The story goes they lived in a small town where the musicians that were available to play with were so bad that they rather had no music in their live. There was no music coming from them in that way but it was in my blood. It was the only thing I wanted to do from my very early age on. 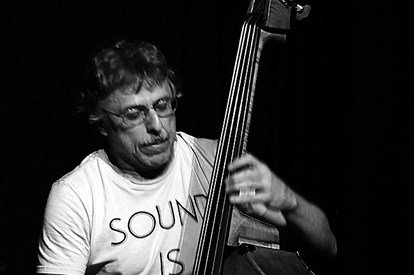 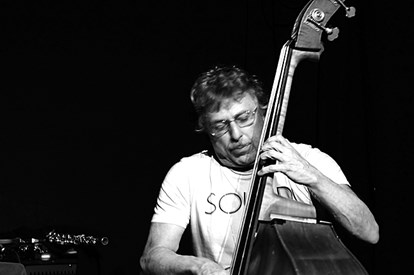 Did your parents force you to learn to play an instrument?

JF: No, not at all. It was something I wanted to do. I did try to play trumpet like any son tries to follow his father's footsteps but it didn't work for me. I remember I came from school in tears and saying to my mother: “I don't want to play trumpet. I want a guitar, mom.” But I was worried about my father being really upset and disappointed but she said: “I will talk to your father and get you a guitar.”

Why did you switch from guitar to bass guitar and later double bass?

JF: That is an interesting story. In High School we had a band. There were six of us, one was playing drums and the other five guys guitars. We were 14/15 that time. We looked at each other: “Man, who's playing bass?” Everybody wanted to be Jimi Hendrix or Eric Clapton. I said: “Okay, I'll do it!” Nobody else volunteered. I took my 30 dollars I had saved and bought an electric bass. So I started as a bass player. It was probably the best thing I ever did because the other guys are pumping gas. And I am now here with Lou Grassi and the Nu Band because I took the bass. I did the right choice. 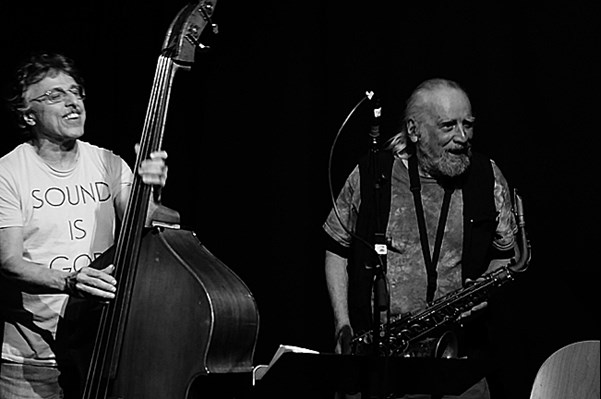 Do you see a relation between your personality and the instrument you picked?

JF: Good question. I am very physical when playing.  I developed that way of playing  because my best friends in the music world were drummers like Lou, Barry Altschul, Steve MacCraven, Kenney Johnson, Harvey Sorgen . When I was playing with Steve MacCraven back in my 20s we would play duets for hours on ... and just the two of us. I have always been connected to the drummers. One of the reasons why I play so physical is because of playing duets  with  Steve for years. In order to play with drummers  you have to be very physical and very rhythmical. Somehow the bass fit  dose fit my personality.
How I would define it? That's hard to figure out. There is something about the bass. It has something to do with the rhythmical reality in the music and the physicality because the bass is very physical and you can approach it very rhythmical. You can also approach it harmonically and melodically which I do. But the rhythmical reality comes first. I like to have that thing up against my body. You know the groove! I am connected to the groove. The bass has something to do with that. 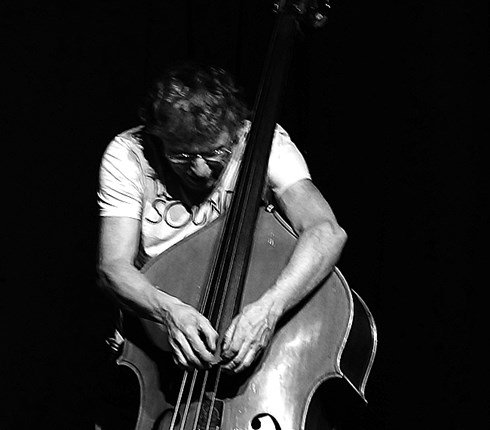 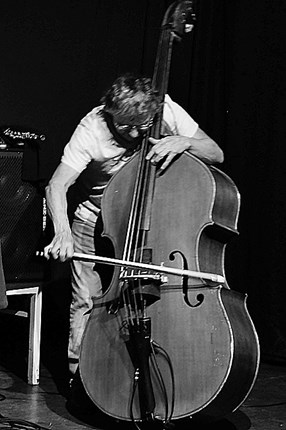 Do you remember the first Jazz record you listened to?

JF: I do. My parents had it. It was a Big Band record and Betty Carter was the vocalist. I can not remember who the Big Band arranger was. On the cover of this old record is a satellite and her face inside the satellite. I took this record from my parents and played it even without knowing what it was but I was touched by it. This was one of the very first jazz records I ever heard. It must have been a record made in the 50s and I can still hear the sound in my brain.

How relevant was that first jazz experience for your career as a jazz musician?

JF: No, I think maybe on a psychological level it sparked an interest in it. I didn't know I would find my way to that music because as everybody at my age I was in the 60s rock – Jethro Tull, Uriah Heap, Buddy Miles, Cream, Jimi Hendrix and Howling Wolf kind of character. It was an evolutionary process to leave that music and find my way to the music I play now. I would say the early record what it did was planting a kind of seed deep down in my being. And in a way it later flourished. Here I am with the NU Band. 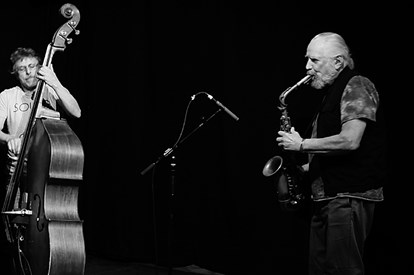 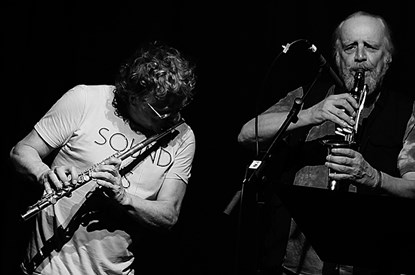 How would you describe the music of the Nu Band and how much is it influenced by Ornette Coleman?

JF: First of all I would say Ornette has had an influence on everything that had happened in this music since 1960, perhaps even a bit before that. He was the source that brought about the change. His influence is everywhere, everywhere. God bless him. The music the NU Band plays is very much from the Coleman school. I would say every body of us brings in compositions and all of us are encompassing the entire continuum of the music. We use everything from Louis Armstrong right through to Henry Threadgill and everything in between. The Nu Band is a band encompassing the whole history of music. We use the improvisation approach as the essence. We write a lot of music. 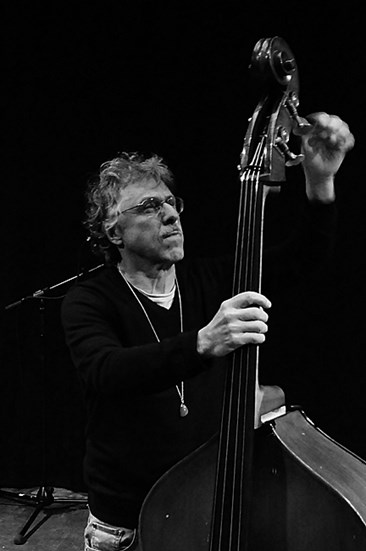 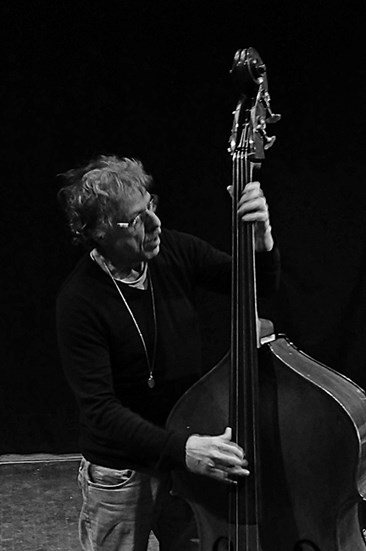 What are the sources of your own compositions?

JF: Sources? I tell you what the sources are: Charles Mingus, Leo Smith, Béla Bartók, Gil Evans, Anthony Braxton, Threadgill is another, Ornette is another, Debussy, Stockhausen. These are all people in my mix in terms of compositional influences. 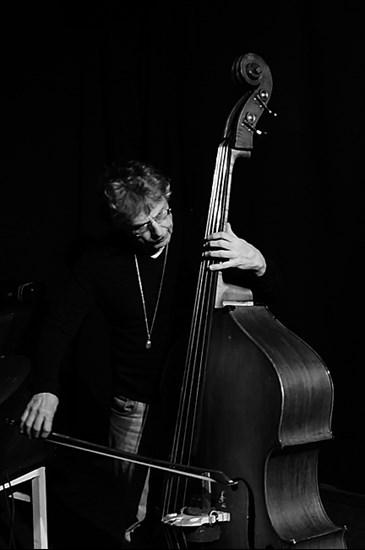 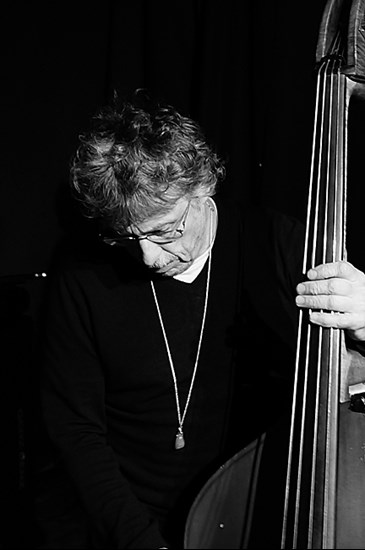 You co-operated in the past with Xu Fengxia who lives in Paderborn (Germany). Xu with her Far East background met an American Jazz musician so to speak. How did it work considering the instruments Xu plays like the guzheng and the sanxian?

JF: I tell you something you know. I never forget this: In 1973 I heard my first ensemble from either China or Japan. I think they were Japanese. They came to a college in Amherst, Massachusetts where I lived. They had three or four Koto players, flute players and drummers. I hadn't heard that kind of music before and there was something in it that touched my soul. There was something in it I understood. I was drawn to that music. After that concert I never pursued it but it landed inside me.
It is interesting that some 30 years later I meet Xu Fengxia. We created a duet project together bringing that same music that I remember hearing in 1973 and mixing it with my own musical reality. When we played together I had an understanding of how her music is organised. She had the same thing because she came here working with Peter Kowald. I share another interesting story about Xu Fengxia: during the first gig we did at the Bunker this woman showed so much energy and there was so much rhythm coming out of this woman's singing and her guzheng. After we had done it I asked her husband how does she play so rhythmical, with such a pulse. Well, Xu was the first female Rock drummer in China. She was in an all girl rock band, That makes sense because she plays her instrument like a drummer. She tired me out. I was exhausted after the first gig in Bielefeld.
There is another hook up because we both are very rhythmical going back to that drummer bass relationship. She is fantastic. I love playing with her every time. 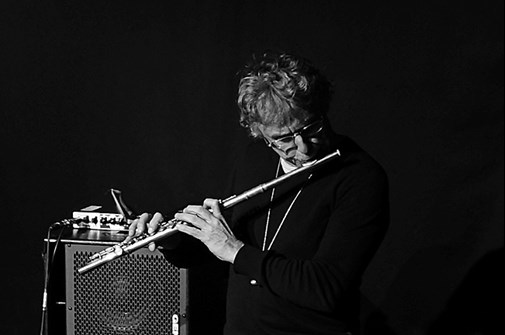 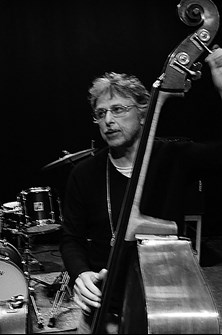