Eva Klesse: interview with the drummer from Leipzig/New York 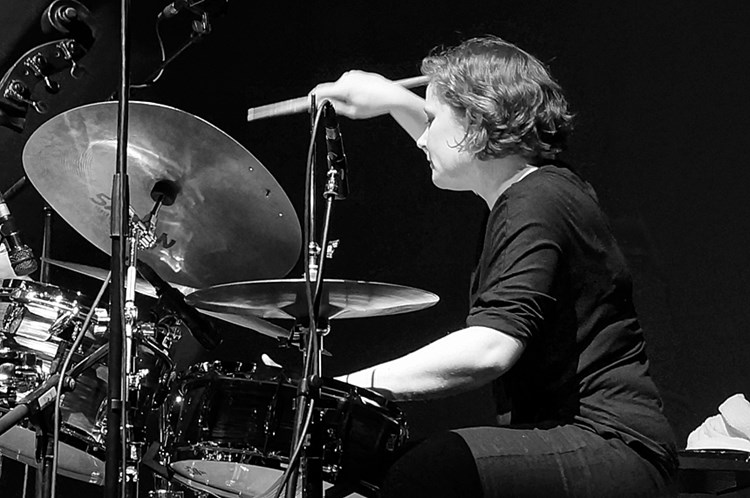 Eva Klesse started with drumming at the age of eleven. She switched from medicine to music when she studied and followed lessons in music at the Conservatory in Leipzig, Weimar and Paris. She received two honour degrees and was lucky to get a scholarship at New York University. She finished her studies there with a master degree in music. At present she follows a master class study at the HMT Leipzig. Amongst her teachers are Heinrich Köbberling, Richie Beirach und Ari Hoenig.

She was and is involved in the Jorinde Jelen Band, Julia Hülsmann Oktett, Trio No Kissing and her own quartet. In 2013 she was awarded with the Leipziger Jazznachwuchspreis of the Marion Ermer Foundation. Four years later she was granted the Westphalia Jazz award.

How important was your upbringing considering your career as a musician? What was the first contact with music like? You started to study medicine but gave it up and switched to music. Why? Hard facts and figures, a secure flow of income, an accepted career here vs. expression of emotions, freedom of expressions, melodies, controlled loss of control, being on stage there?

EK: Actually I am lucky because I was always in contact with music from my early childhood on. My father is a lover of classical music. At home we listened a lot to Bach, Mozart and so on. As a teenager I got interested in Rock and Pop music. I started to play the drums as a Rock drummer. We played Silverchair and Red Hot Chili Peppers and Placebo and stuff like that. We covered the stuff with my first band when I was 13. I went to a school specialised in music as a major subject and I was planning to study music. I was a bit afraid to pass the entrance exam at the conservatory. I knew and I heard it is quite difficult to pass the testing which is true. Then I switched the subject and decided to study medicine when I was 19. I followed the seminars  in medicine for 2 ½ years in Leipzig. I went to Leipzig because Leipzig was well known for its music scene as well. I formed a lot of bands and made quickly contacts with a lot of musicians. At some point I had to decide whether it's gonna be either medicine or music because you can't do both at the same time. Both subjects are quite demanding. Then I thought by myself what would it be like to concentrate only on music. I gave it a go and I tried to pass the entrance exam. First I failed and they did not accept me at the conservatory but finally  they did.

Why is the drums your favourite instrument? Female musicians are mostly vocalists and it is pretty rare to come across a female double bass player, drummer or trumpetist.

EK: That happened when I was 10 years old and I didn't think at all what is an appropriate instrument for me as a girl. I did not think like that at all. Therefore I can not really answer that question. I heard some people playing the drums and thought that it is cool. I played the flute before and at a certain point I found it quite boring. I wanted to do something else. My cousin played drums and that's why I tried it. For my 11th birthday I got a kid drum set as a present. I never thought about it as a gender question until I became a professional musician and everybody was asking me about it. As a little girl I didn't care about it at all. 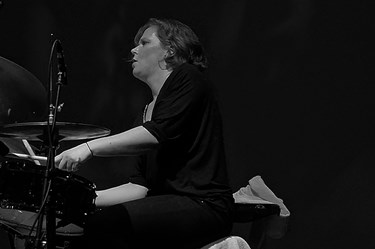 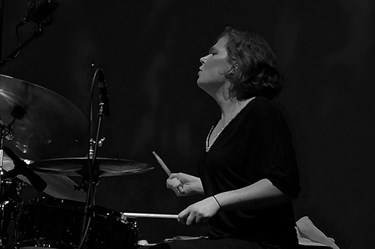 What did your parents think about it? Parents very fond of classical music think maybe more in terms of a piano as an adequate instrument for their daughter I would assume.

EK: I am lucky that I have amazing parents who always supported me in what I wanted to do no matter what it was like. They never had a problem with me wanting to play the drums and they did not have a problem considering that I wanted to quit medicine. They actually encouraged me. The said: 'Go for it! It's great.' I am really lucky that I did not have to fight for that.

EK: I discovered Jazz quite late. The first tunes were Big Band tunes whilst playing in the school Big Band. That means I came in contact with Jazz by playing it. I remember that my drumming teacher gave me some Jazz records and told me that it is great music. I found it okay but not really interesting. I probably did not understand it and it seemed chaotic to me not knowing what is was. That means I got to know and to love Jazz by playing it and started to listen to records but that was in my early 20s. Not a very long history between me and Jazz! 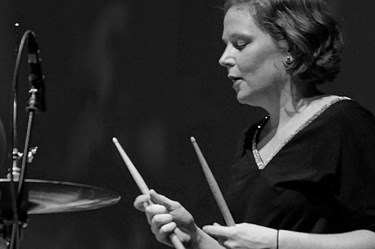 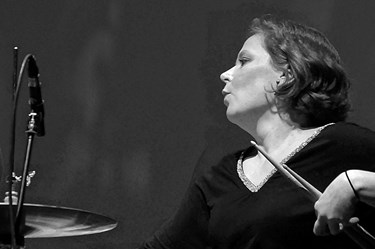 Did you or do you look mostly for more drums influenced Jazz like tunes by Max Roach or Art Blakey or even Ginger Baker in its early and later days? In other words: How strongly are you focussed on the drums as an instrument?

EK: Not at all! I was always going for music and not for drums. I listened to a lot of music where you could not find drums. I like singers a lot as well as bass players and pianists. Yes, drummers if they fit in the music. I am not so much into the artistic conception of playing the drums. I mean that is okay and impressing but I'm always looking for the musicianship not the 'circus' focussed on how someone can perform.

Do you think you are an 'exotic person' in the world of Jazz considering that women in Jazz are quite rare?

EK: I do not consider myself as exotic but a lot of people do. Yeah, I have to think about it. The number of female musicians has increased recently. It is great and I hope that the next generation does not have to think about that question any longer because there are then as much female musicians as male ones. That means it doesn't matter any more.

Do you think that the gender question has a high priority in the Jazz scene or during the studies as in other university departments outside of arts and music?

EK: When you walk into a room with new musicians and they notice that you are the drummer of the band you realize that they are a bit puzzled. When you start to play and it is cool everybody thinks it's cool. Sometimes you have to proof that you can handle the drums in a similar way as a male drummer. Why should it be something special? 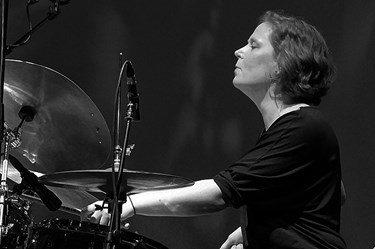 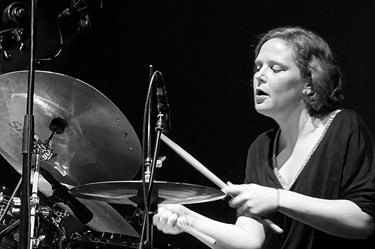 Would you mind to describe your role as a bandleader sitting behind the rhythm machine?

EK: I am a bandleader in the sense that I organise everything. Of course we play my tunes but as well the compositions of the other band members which I like a lot. I think that it is very important for the sound of the band that we present all those different colours. Yes, I am a kind of bandleader and my name stands for the band but on stage we are just a quartet.

Is the drummer the better bandleader quoting Ginger Baker when he was asked after quitting Cream and his own band and started to play Jazz again? 'The drummer is responsible for the timing' he said.

EK: The great thing in our band is that I am not the only one responsible for the timing. No one is entirely responsible for anything because we share and change the roles in the band. Sometimes the saxophone player is important for the timing and I can do whatever I want. That is what I like. What I like about drumming is not being only the time keeper but doing a lot of other stuff. The drums are a great instrument to influence the energy but I do not think that I am leading the band musically. At some point everybody is doing it. Sometimes I just enjoy to listen to the members of the band while being on stage.

Would you agree or disagree with the definition of your drumming as a soft flowing approach in comparison with the hyperactive drumming and with hitting hard on the drums and the cymbals? I got the impression that you are a sort of 'dancer behind your rhythm machine' similar to Marilyn Mazur. How do you see yourself?

EK: I don't know. That is again the gender thing. People write about me that I play so gently. Yes, I do but sometimes I am hitting the drums very hard too. There are different colours in my drumming I hope.

Let's talk about your compositions and your approach to new tunes: Could you describe the most essential ingredients you need.

EK: Well, I am sitting at the piano and trying things out. Sometimes I have a melody in my mind and try to find the right notes. I am not a really good piano player. (laughing) That is a pity but I am trying to learn it. Composing is really a sort of try and error for me. When I still remember what I did in the beginning after a few days, I think it's good enough to write it down and keep working on it. I am a slow composer and most of the time start with only melody and a bass line first. 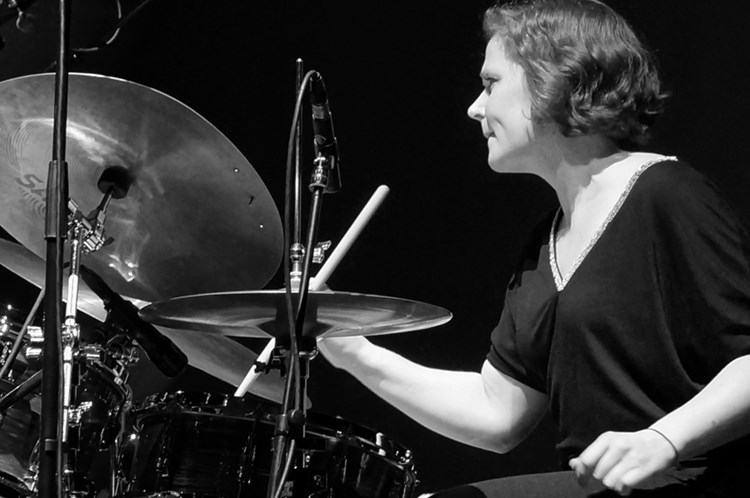 Does it matter to open up spaces for your band members when composing?

EK: Yes, more and more, because I get to know them better and better. Even if you would put a blank sheet of paper in front of them they would make great music out of it! I am just trying to give them some hints where we could go.

How important is Westphalia Jazz award for you?

EK: I am very happy to receive it because I am originally from the area being brought up in a small city between Münsterland, Ruhr Valley and Sauerland. I still feel connected to the region even not living here any more. I like the people and the dialect as well. I am happy and looking forward to the three concerts which are part of the award.

Thank's for talking with you.