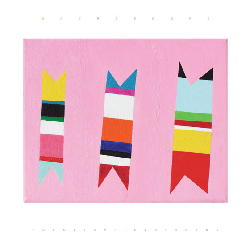 Well, it seems that Record Release Day is upon me, upon US. It's OUT, and may it flow/cut through to you, to someone…. It's a blessing to be alive and tossing this into the glowing void! Thanks to everyone - Scott, Trevor, David AKA db, Jeff, Jesse, Yuka, Zeena, Josh, Cyro, Ben, Dennis, Matt, Stephen, Jeffrey, Andrew, Denny, Spottswood, EVERYONE….. MACROSCOPE: another Singers record with sounds, grooves, songs, a heapin' helping' (at times) of guitar, and of PEOPLE playing and just being alive. Thank you for listening. XO - Nels

Get it now on Vinyl LP, CD or digital download: http://wilco.kungfustore.com/categories/83-nels-cline-singers

Leading up to the April 29 release of The Nels Cline Singers' MACROSCOPE, Nels wrote track-by-track descriptions of the 10 songs on the album.

Just Scott, Trevor, me. A ballad that I had in my head that gradually erupts into BIG ROCKOUT that in retrospect has an unintentional Rush flavor! Playing the HOT SHIT solo in the studio is so difficult for me... Should be a scorcher 'live'.

A groover in 6/4 dedicated to our wonderful friend and remarkable chef Paul Canales. Written in Scott's house during our little residency at Paul's Oakland eatery DUENDE, it's a bit like some of my other tunes from days of yore but not. This is another one with just the trio and is saying 'hello' to Paul and to you all...

BREATHE! With Yuka C Honda, Cyro Baptista, Josh Jones all guesting, this uses the Zawinul/Ornette strategy of rubato melody/harmony floating over a solid groove. I actually do wordless vocals, a nod to my Brazilian heroes like Baden Powell and Hermeto Pascoal - humor me here, folks! But oddly, I was actually thinking about Caetano Veloso when I wrote this... The groove, involving a loop created by Scott's electronic world, coalesces at the end with a mighty ostinato, Yuka's electric piano drenched in Seek-Wah (google it) rising like celestial orbs... I play electric 12-string on this and several other tracks on this album if anyone cares.

Lounge-y! Smooth jazz! The Quintronics Drum Buddy (google it) sets up a groove/progression that I wrote in the studio to entertain my wife and to potentially shock and/or dismay all the rock and free jazz people out there. Hah! It probably won't work... This is also a sort of tribute to two guitar heroes: George Benson and Jimi Hendrix, which is pretty obvious once one hears this, I suppose. Yuka, Cyro, and Josh all return as potent and cherished guests. It is my not-so-secret hope that someone samples a part of this for a rap song someday...

A bit of a journey, this is heavy with Scott/Cyro/Josh percussion and ends with a hypnotic repeating melody/progression that is still shocking to me since it's basically a 1-4-1-4-5-4-1 type of thing in D major. What?! The influence of Wilco perhaps? Maybe an incursion of folk/country content?? Or the sound of celebration?... Indeed, this is meant to be a trip to breezy and celebratory energy, erupting in a veritable fireworks display of whooping psychedelic noise by song's end. Check out Trevor in the middle bit! And for all of you linguists out there, the title has a double meaning. The opening five-chord melody, a preview of the celebratory ending melody, features Scott's fuzzed-out mbira (google it). And again I am on electric 12-string (some looping madness in the open opening section) with lap steel overdubbed on the repeating "song". I have no clue now how to get this to sound like this 'live". I guess I need to expand the combo...!

A ballad of sorts and (to me) a blatant reference to Hermeto Pascoal's pieces for Miles Davis such as "Little Church", this arid bit of wistful psychedelia is dedicated to the brilliant artist Yayoi Kusama. The gradual incursion of sonic particulate matter is meant to suggest her "infinity nets", and is held together by the gravitation field created by the sound of my pal (and co-producer) David Breskin rubbing his hands together. Much could be written about this but I am trying to be brief... Scott and Yuka create the particulate matter electronically (with a funny drum box and OP-1, respectively), Trevor plays contrabass, and I play treated acoustic guitar (thank you, Jesse Nichols!) and once again my wonky voice appears in a somewhat murky manner.

Featuring the remarkable Zeena Parkins on her electric harp, this was a short Drum Buddy jam that had such savage beauty from Zeena and such a deep groove from Scott and Trevor that I had to do something with it. I went in and added some guitar bits for harmonic cohesion, but the main "voice" you hear is Zeena doing her thing - at one point it even sounds like someone is speaking! Eerie and astonishing... The track sort of reminds me of Public Image, Ltd. and if you wish it was a bit longer, so do I!

Opening with a blatant reference to 60s/70s lines like "Freedom Jazz Dance", "When Face Gets Pale"(google it) and the like and landing in a vast ascending elegy, this is an excuse to blow free as well as to surrender to harmonic wonder. Cyro returns with magical percussion color, Trevor solos on contrabass, and by song's end Scott plays his ride cymbal with one hand while sampling and morphing the sound of the entire band with his pedal array with the other. We can do this 'live', folks! Once again, I play electric 12-string.

The title and riffs for this paean to snarling psych/garage rock came to me while on a visit to my hometown of Los Angeles. I was crawling (natch) on the 10 Freeway and BAM! This is either a testimony to our stylistic flexibility or a cautionary tale of how one may not really need to realize every idea that comes into one's head..! Anyway, it opens with a pounding Drum Buddy improv that I was calling "Psychopartyprov" and eventually the fuzz-drenched caveman "song" hits, endeavoring to both make you smile and crush your brain. The ascending bridge after the bonehead guitar solo is my personal reference to The Flamin' Groovies' "Shake Some Action", even though the resemblance is pretty minimal.

Scott Amendola's son Sascha has a cute book with pictures of all types of frogs. I can't remember the title, but it might be "Frogs". It's cool and so is Sascha. This piece, meant to be a fun design for mostly free improvisation, marks a first for me in that I have never ended a record on such a whimsical note. But what the heck? My records usually end with either "poignant balladry" or "searing catharsis", or an attempt at both simultaneously! Anyway, this trio piece may be a trifle but to me it is also a nice balancing ingredient to the program, is fun to play, and is an oblique conclusion made even more oblique by David Breskin's suggestion to end with what was originally the second-to-last written line. Good idea, db! And with that, I bid you goodnight...