The Felonious Monks - With Criminal Intent 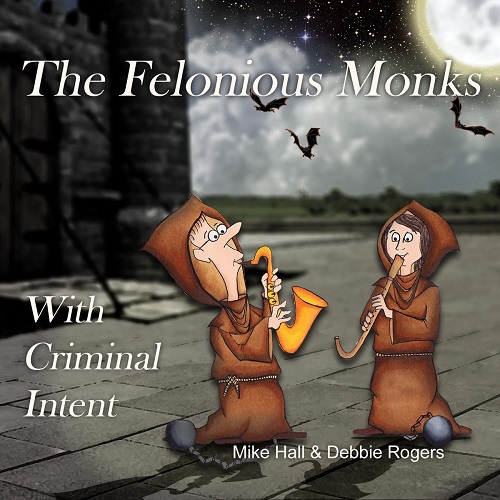 What do you get when you fuse jazz with "early music"? It's a challenge which has been taken up surprisingly rarely, considering the role of improvisation in renaissance music. Perhaps the best known example is Jan Garbarek's work with the Hilliard Ensemble. Another of my own favourites is the 2020 album from Quartet Ajaton which combines viola da gamba with Moog synthesiser on pieces by Elizabethan composers including John Dowland.

This new release from The Felonious Monks takes a very different approach, juxtaposing crumhorn, shawm, cornett and recorder ensembles against the sound of a modern jazz group. It features compositions by Mike Hall and Debbie Rogers; Mike is perhaps best known as a jazz educator and for his work leading the UK Royal Northern College of Music big band. Debbie was a long term member of early music group The Kincorth Waits. The depth of their experience shows in these stunning arrangements for a 12 piece band, creating sonorities you've probably never heard before and allowing every instrument to shine. The quality and ambition of the recording reminded me of Django Bates's work with Stormchaser.

Originally commissioned for the 2013 Manchester Jazz Festival and recorded shortly afterwards, this is the first general release for "With criminal intent" on the Jazz'halo label and Bandcamp. Producer Rob Buckland has portrayed the spirit of the music and captured an ideal acoustic space; it was first performed in a church setting. The album title refers partly to the feelings Hall and Rogers had when writing the music; they feared that the project would outrage purists from both early music and jazz worlds. It's also a resonant title for music which has surprising echoes of TV detective shows and B movie exotica.

Three of the nine tracks are built around arrangements of 16th century music; "Ballo Francese" and "Putta Nero Ballo Furlano" were written by Venetian composer Mainerio. Mike Hall has transformed them with reharmonisation, syncopation and pungent instrumental colours, recalling how Stravinsky reinvented the music of Pergolesi in "Pulcinella". "Robin's lament" is based on a song by William Cornish, first presented by Renaissance guitar and beautiful four part vocals by band members. Debbie Rogers then develops the theme with luminous instrumental colours, featuring cornett, cornemuse and an expressive sackbut solo from Simon Lodge.

Other tracks are all new compositions which sometimes contrast early music ensembles with modern instruments in "call and response" sections, other times combine the soundworlds with inventive orchestrations. There's a four part crumhorn group which sounds surprisingly delicate alongside the sax section; the period instruments were loaned from the University of Manchester and are played with a lot of skill - always carefully balanced, in tune and expressive. Mike Hall's "Time trip" is a cross between contemporary classical influences and an American detective TV show theme which is lit up by a recorder chorale. There are thoughtful solos from pianist George King and trumpet/flugelhorn maestro Steve Waterman, who solos to great effect on 5 of the tracks.

"Brother Charles" by Debbie Rogers contrasts a modal theme played on shawm, rauschpfeife, cornett and sackbut with a chromatic improvised section featuring exciting post-bop sax solos by Carl Raven and Mike Hall. "Bats in the Belfry" begins with a cunning syncopated riff on piano, reminiscent of "Blue Rondo a La Turk" and develops into a fierce sax counterpoint over a pungent combination of bass clarinet and baritone sax. This combination is used again to great effect on "Of the night".  Mike Hall describes this piece as a homage to Duke Ellington; it has plenty of call/response between reed and brass sections and thrilling bent chords which capture the Ellington "cloud" complete with sly piano interjections then an extra ensemble colour from shawm and rauschpfeife. It's easy to imagine this is exactly what Ellington and Strayhorn might have done with these sounds.

On the final track "PD Calypso" we get a chance to hear how Renaissance instruments can work in an Afro-Cuban context, combined with Helena Summerfield's flute and another smoking sax solo from Mike Hall. This album succeeds in opening up new sonic territory with a fine band who are totally committed to the musical ideas. There is plenty of playful humour and sonic colour, held together by multi-layered compositions and rich harmonic twists.

At this point I should declare a potential bias - Mike Hall and Steve Waterman appear on my 2021 album "We could fix everything" but I heard these recordings before beginning work with them and it's great to see the album widely available at last. Who knows, if enough people buy copies it may even be possible to fund a tour!