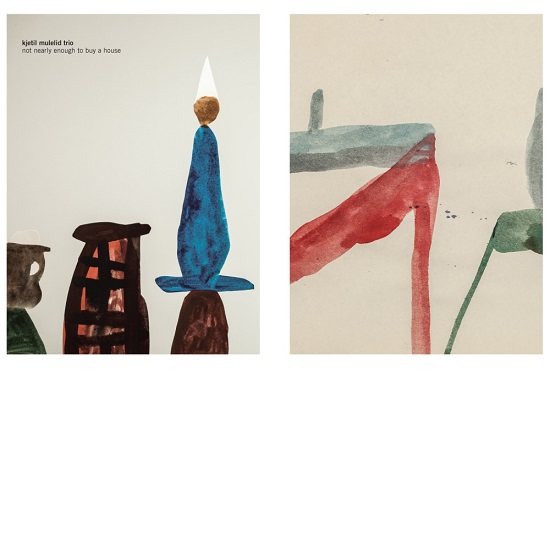 Last October Kjetil Mulelid Trio (finally!) released its debut album, with the intriguing title 'Not Nearly Enough To Buy A House'. The compositions on it not only vary in duration - 1:34 only takes the opening track, the longest piece finishes at 7:12 - but also in terms of content and structure.

'Entrance', an appropriate name for the first track of an album, immediately has a surprise in store: the melody leaves the listener with the impression that he actually only heard the end of the piece and makes him regret to have missed what came before. While that composition really does stand on its own.

'Fly, Fly' is a very catching and powerful piece in which the trio grows steadily firmer, until a change takes place approximately one and a half minutes before the end: Mulelid plays solo for a short while, but is then again accompanied by the excellent rhythm section to get to the final chord.

'Children's Song' sounds almost like a piece of classical music. Resolutely, the trio chooses a more intimate approach, with moments of splashing piano play that is subtly colored by a very inventive Hegge and by Winther's brushwork.

These first three pieces already fulfilled a lot of expectations, but even more and really interesting is 'You Stood There In Silence, Having No Words': the pianist carefully exploring and then again decisively playing the guiding motive; Winther tirelessly using all parts of the drumkit; and Hegge having his bass pondering about the most appropriate places for his sophisticated notes. Of the same high level is ‘C & R’, which sounds like an exercise in collective improvisation: Mulelid apparently randomly touches some keys, also rubbing his fingers on some strings inside the instrument; meanwhile a subtle Winther sporadically hits a small gong or slips a drumstick over the cymbals ...

Unnoticeable, the trio slides into 'Someone Else's Point Of View', a piece for which the musicians walk within a similar sound landscape as before. Winther, in a pronounced role, through mainly hitting the cymbals and in between rolls, brings extra shine to the resourceful piano performance; a prudent Hegge provides cautious and thrifty accents.

'Time / Breadth', by the atmosphere and the way the three musicians use their instruments, for a moment reminds me of fragments that Morricone provided in Leone’s Westerns soundtracks for scenes in which the (anti)hero is in danger of being shot from a rooftop. Hegge, using his bow on the strings of the bass, lays a reliable foundation under a seemingly shaky musical structure.

After the preceding four pieces, which with each listen reveal more and more of their layering and mystery and for that reason for me constitute absolute highlights of this CD, 'Leaving Home' may sound rather simple and straightforward. This piece, however, after multiple auditions shows to be an inexorable earworm.

With 'Three Last Words', Kjetil Mulelid Trio, as it were, summarizes just about the entire CD: the tender melody line with which they start putting the listener on the wrong leg, for about a minute and a half later he’s overtaken by a sudden silence lasting sixty seconds. However, the assumption that the album has come to an end must be revised, as it is actually closed with a final short piece of collective improvisation.

'Not Nearly Enough To Buy A House' is really a great first album by a trio with multiple strong assets: compositions (all by Kjetil André Mulelid) that let glow new facets with each listening, performers who flawlessly feel each other and support one another generously.