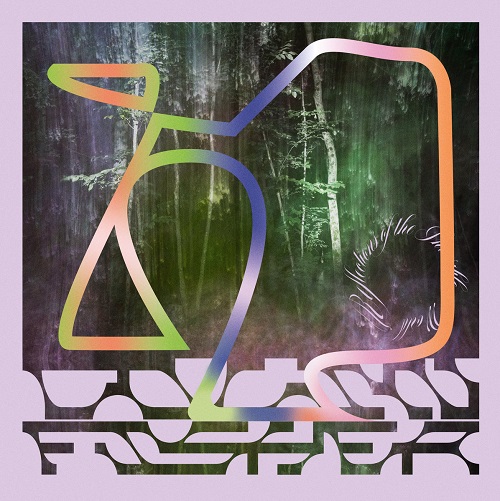 This album contains lots of interesting musical ideas; unfortunately for me the whole is less than the sum of its parts. Partly this is due to some puzzling production decisions; the mix contains very little low frequency or high frequency energy, the sequencing of tracks does little to draw the listener in and the lo-fi sound ends up being flat rather than intriguing. It sounds rather as if the whole thing was both tracked and mastered on cassette. This impression is reinforced by some distinctly 1980s sound design.

The CD sleeve gives very little information, with both design and track names being abstract. Fortunately it came with a press release which explains that the music was multi-tracked by Colin Fisher on guitar, saxophone and electronics, with Jeremy Greenspan producing. There are references to "psychedelic lyricism" and "expansive atmosherics" which didn't quite chime with my listening experience; I'm not sure filter modulation and echo effects are enough to create psychedelia, there are too few melodic lines which sound lyrical and it's hard to pin down any particular atmosphere. Having said that all tracks flow freely with no metronomic pulse and no resort to jazz cliches; Fisher is good at creating harmonies which are unusual without sounding tense or random. The down side of that is little sense of tension and release.

Track 1 "Zero experience" begins a slow attack bell sound reminiscent of Yamaha's FM synths of the 1980s. This is joined by some thin, glitchy guitar tones and sample/hold filter effects echoed across the stereo field. A parallel harmony sequence is established and this soundscape continues for 5 minutes with some variations in density and reverb. To my ears this is the weakest track on the album so it's a shame to begin with it.

Guitar arpeggios begin track 2 "Salient charm" sounding a lot like The Durutti Column. A synth like lead line joins in, probably playing on guitar and again with parallel harmony; this continues for 6 minutes with some subtle changes in harmony but little sense of narrative.

Track 3 "Monadic mirror" is based around sustained guitar chords played through a filter with sample and hold modulation. This sound effect is fine in small doses but is overused through the album. The track could be ambient and hypnotic but sails close to tedium.

Things look up on track 4 with some distorted guitar with whammy bar, duetting with a smoky tenor sax line and vibrating chords. There's a lot more incident and lyricism in this track, plus some interesting glitch effects - it would have been a much better opener for the album. It builds to a climax over 5 minutes then gently subsides.

In the press release Colin Fisher is described as a guitar virtuoso with impressive improvising credentials. There's evidence of some fast playing particularly on track 7, "Sanctum" but we don't really hear him harness this technical proficiency to expressive effect. The whole album demonstrates flexible improvisation but the best improvisers create drama, surprise or a narrative structure, which is not yet apparent after several listens. Somehow the ideas are not developed enough to give the pieces form or repeated enough to provide a hypnotic ambience - I longed for the music either to cut loose from its middling tempo or to settle into some sort of groove. But this is a very personal response and others may love the even temper of these tracks.