Sorry, this CD is no longer available 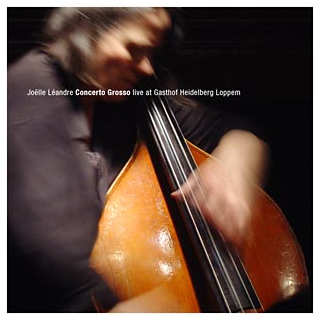 All compositions by Joëlle Léandre

Recorded live during the Locus Loppem-event at Gasthof Heidelberg Loppem (B) on January 29, 2005 (Disc Two) and on January 29, 2005 (Disc One) by Jean-Marc Foussat
Remix and mastering by Jean-Marc Foussat on March 4 & 5, 2005
Produced by Joëlle Léandre
Executive producers: Roland & Maarten Patteeuw for Locus Loppem and Jos Demol for Jazz’halo
Recording engineer: A-Man
This recording joint production of Kunsthalle Lophem and Jazz'halo

“Pity the poor bull fiddle. It’s taken over from the tuba as the anchor of most jazz groups, yet when its turn comes to solo it’s often seen as time to chat or go to the bathroom. It more than has the range of the saxophone or guitar, but the low tones demand greater concentration to follow. Still, two of its finest players have dedicated themselves to solo performance. Frenchwoman Joëlle Léandre has devoted much of her career to solo performance and Concerto Grosso is the latest in a line of unaccompanied releases. Like Derek Bailey (with whom she’s recorded) or Cecil Taylor, Léandre has developed a language on her instrument that is dense and easily recognizable as her own. Her long bowing and percussive approach, coupled with her expressive vocalizing, are distinctive and deeply evocative. The Gasthof Loppem recording - released by the Belgian label Jazz Halo - captures two January 2005 sets across two discs (totaling 87 minutes). As with Bailey or Taylor, it’s difficult to take her playing apart or to rank her performances against each other. She tends - here and in general – toward shorter improvisations; the 14 pieces here never break the ten-minute mark. The recording is close and personal and the performance beautiful. She’s an artist who can’t be known without being heard solo and Concerto Grosso is an excellent example.”
Kurt Gottschalk in ALLABOUTJAZZ-NEW YORK | December 2005
http://www.allaboutjazz.com/php/article.php?id=20023

“Concerto grosso, the great concerto, is the baroque music term for a solo instrument playing against an orchestra. In French bassist Joëlle Léandre’s interpretation, there is no orchestra – just her self and the doghouse. And it’s a bit of a gamble issuing a double CD devoted to solo bass! But Léandre is not just anyone. She has managed to navigate her way around improvisational music in an open-minded way, with Irene Schweizer, for example, as well as with more recent compositions by the likes of John Cage. Her strength is that she is at one with her instrument; she has completely mastered it. This virtuoso does not blow her own trumpet! She can play pizzicato and arco at the same time, creating polytonal sequences and harmonics that take the music into new dimensions. Melodies grow out of syncopated grooves as she slaps the strings. The soundbox gets the same treatment, as she flays the strings and adds vocalisations. She plays provocatively with phonetics in her Parlotte. It is fabulous music, temperamental, even irascible at times. Ninety minutes later, you realise that you haven’t been bored.”
Allan Sommer in JAZZSPECIAL (DK) | 12/2005

“Parisian Joëlle Léandre is the prime example of a schooled musician who utilizes her expertise in another genre to move into the first ranks of improvisation. Always insistent that she loves ands appreciates jazz, but can’t and doesn’t play it, the French double bassist came to improv in the late 1970s, after establishing herself as one of the paramount interpreters of contemporary classical compositions by the likes of John Cage and Giacinto Scelsi. Since her embrace of free music, however, the Aix-en-Provence native has worked and recorded in a variety of contexts with groups ranging from duos to ensembles, and held her own—and then some—with such distinctive stylists as the late American soprano saxophonist Steve Lacy and British guitarist Derek Bailey.

A set of three new releases showcases the bull fiddler in trio, duo, and solo sessions. Concerto Grosso (Jazz’halo) is a very recent—January 2005—two-disc tour-de-force, featuring only Léandre, her bass, and her bow.

Even a cursory listen to Concerto Grosso proves that the bassist is easily able to carry a performance on her own and enrapture an audience. With her breakneck pizzicato runs as flexible as her sonorous bow work, Léandre is comfortable manually manipulating every part of the double bass, not just the strings. As selected expressions are extended with unexpected finger finesse, she sometimes appears to be two complementary double bassists, and by adding occasional quasi-scat vocalizations she can transform herself into the Léandre trio.

“Le Sommeil d’Hercule”—loose translation: “the sleepiness of Hercules”—for instance starts with counter tones that, despite her non-jazz background, still resonate with Mingus-like inferences. Encompassing ricocheted pizzicato accents, hearty guitar-like strums, buzzing string vibrations, and echoes, she then moves to darker and deeper tonal explorations. However, as she digs further into these sonic textures, she ensures that the output doesn’t neglect the andante and legato qualities of the bass. Modulating to other quadrants, timbres surface, first high-pitched, then droney in mid-range, finally intermingled as a polyphonic showcase. Shuffle-bowing and wood-reflecting accents dissipate into bottom-of-the-bridge drones, with a single strum serving as the tune’s coda.

“For Tony”, on the other hand, is a multi-tempo display of such extensive spiccato that at points, it seems as if Léandre is cutting through the bass wood into the vibrations themselves. Double-timed staccato expressions in different pitches fly by so swiftly that at points you’re not sure whether you’re hearing a bluegrass fiddler or some descendent of Nicolò Paganini. Historically, however, it’s doubtful that the 19th century “father of the modern violin” ever harmonized vocally while he soloed, or appeared to be extracting harmonies from inside the instrument for a finale, both of which are part of Léandre’s talents.

Her characteristic vocalizing gets even more of a showcase on “Parlotte”, as she begins chanting in between her sharp slides and plucks. Although Léandre is probably using the unconnected verbal syllables for the onomatopoeia-like attachment they have to the tones she’s producing from her axe, recognizable words such as “fou” and “chic” are audible. Again emphasizing the cured wood attributes of her instrument, the track’s exit strategy is designed with multiphonics.

Earth-throbbing bass lines, flamenco finger picking, and staccato pitchsliding are other techniques on show, with glissandi often used to express the roughness and hardness of the strings’ texture as well as their music-making attributes. With cascading double-, triple-, and quadruple-stopping plus bowing that emphasizes the upper partials of the notes rather than their fundamentals, her experimentation continues even in a concert situation.

One summation of these techniques arises in the bizarrely titled “Love”. Emphasizing, one would think, the heartbreak and pain that the emotion engenders, this nearly ten-minute piece is sul ponticello from its beginning, with the bassist’s approach more high-pitched and robotic than usual. As the jarring, discordant tones pierce the air like the proverbial nails dragged across a blackboard, she seems to be reveling in dissonance. Battering on the waist, ribs, and belly of the bass, the tune’s climax is reached with such staccato pitchsliding that it sounds as if Léandre, grunting with exertion, is almost literally sawing the instrument apart.”
Ken Waxman for www.onefinalnote.com and www.jazzword.com (21 November 2005)

“One of the most extraordinary double bassists of the last thirty years was recorded by Jean-Marc Foussat on January 29 and 30, 2005 at Gasthof Heidelberg Loppem in Belgium, and the resulting double album is simply magnificent. Over the years, Joëlle Léandre has developed a unique style fusing edgy instability with an astonishing adeptness at determining the focal point of a phrase and building a whole instantaneous discourse thereon. Technical virtuosity is stripped of useless gimmickry, and our ears are revitalized by Léandre's peculiar blend of instrumental activism and ferocious irony. On "Parlotte" the call-and-response game between her uttered articulations and the multitude of thumps, plucks and bowed notes that she brings forth from that "great, big, upright, impossible object" (to quote Ms Léandre's Invisible Jukebox in The Wire a while back) is both dialogue and monologue, and fantastic music to boot. Not to mention the physical effects of the bass on the nervous system: Léandre's imperious growl is an experience to be savoured with mucho gusto, a surround sound low-frequency fecundation of the skull. But if I had to choose a single track, I'd say "Spirale", on which Léandre revolves around a barely determined tonal centre like a nuclear powered hurdy-gurdy, playing in and between the harmonics, adding accents, subtracting notes, and letting us gaze at a continuum that leaves us buzzing and reeling.”
Massimo Ricci in www.paristransatlantic.com, September 2006

“Recorded live at Gasthof Heidelberg on the evenings of 29 and 30 January 2005, ‘Concerto Grosso’ is the latest in a long line of solo double bass recitals from Joëlle Léandre, whose work straddles improvisation and interpretation with equal facility. Her recordings of compositions by Giacinto Scelsi and John Cage have been consistently strong, and as a free improviser she’s recorded with many of the greats including Derek Bailey, Peter Kowald, Steve Lacy, Anthony Braxton and Irène Schweizer. Though Léandre loves jazz, her playing isn’t particularly jazzy (which made her a perfect choice to fill the double bass chair for Braxton’s Ensemble (Victoriaville) 1988), and the musicians she works best with are genre-straddlers such as Urs Leimgruber (reeds), Carlos Zingaro (violin, electronics) and Fritz Hauser (percussion). But, more often than not, it’s when she plays solo that she makes her most telling music. The highly exuberant ‘Chant Du Camembert … Fourré’ demonstrates her facility with the bow, which she uses much more frequently than most double bassists and not just for lyrical passages or pedal-point drones. The remarkably intense ‘Spirale’ is a tour de force of bow technique, and it shows how clearly she thinks ideas through and how rich those ideas are. Though she’s always finding new things to say and new ways in which to say them, one of the things that marks Léandre out from her peers is how well she structures her improvisations. She uses her voice (a formidable instrument in itself) less often on this set than on other of her solo recordings, but there’s a lovely stuttery/urgent narration on ‘Parlotte’ which builds up a considerable head of steam while the bass pusues an independent but strangely complementary course of action. Léandre is a fluid, inventive and versatile player with a huge musical personality, as ‘Concerto Grosso’ illustrates.”
Brian Marley in The Wire (UK)

“The record is one of her best. And, as it is, it's certainly one of the best double bass record that I've ever heard. Not the equal of WAS DA IST (but who can ever equal this one?) but certainly in the same league. 14 pieces (the longest is 9'55 long, the shortest 3'22), seven on each record, beautifully recorded (with a close mike) for a sound "bigger than life".
Even David, with his crapy low-fi stereo, could enjoy all the "nuances" of the invigorating playing of Mrs LEANDRE. Guaranty.”
This post has been edited by P.L.M: Jul 26 2005, 11:59 AM