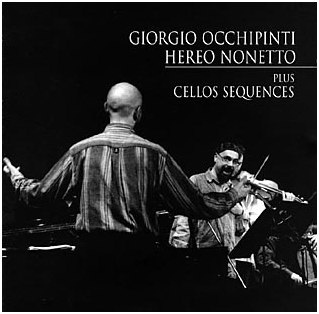 "Imagine Charles Ives filtered through the wacky theatricals of Maurico Kagel. Then add the gritty rhythmic momentum of Stravinsky’s Les Noces, score it for jazz musicians and you arrive at something approaching Giorgio Occhipinti’s music. Despite wearing those influences on his sleeve, Occhipinti is his own man and I’ve never heard music like this. What makes this embarrassment of riches stand out from the crowd? Occhipinti has created a weird and surreal sound-world all of his own. The music sounds like a performance of a fantastical opera, the difference being that we’re not in on the plot. Occhipinti’s melodies often hover on the brink of parody without ever falling over the edge. Familiar phrases and gestures are slightly blurred as our expectations are unremittingly teased by Occhipinti’s droll changes of pace and new material. Often these different types of material collide like a musical equivalent of the Keystone Cops. Occhipinti’s score is a first rate compositional achievement. This music is incredibly difficult to perform and the level of musicianship shown by Occhipinti’s players is remarkable. His writing is very well conceived for the instruments and is fastidiously detailed. Moreover musical irony and humour can backfire spectacularly, but these musicians fully understand Occhipinti’s dry sense of humour and how to realise it in performance. Maurizio Maiorana’s clarinet solos crackle with saucy energy and his Zappaesque vocals - with a characteristic self deflating bravado - seem to encapsulate the joie de vivre of the music. There are a number of wild duets with Carlo Actis Dato on bass clarinet and their ‘chase’ sequences over the backdrop of Occhipinti’s composed music are spectacular.

Occhipinti’s charisma and musical personality oozes from every note and he anchors the music from the piano with colossal energy and drive. A phenomenal CD whose boldness has produced genuinely original and highly entertaining results."
Philip Clark

"Young Sicilian pianist Giorgio Occhipinti describes the sound on this CD as global music, but it certainly has little if anything in common with what most call world music. Instead the suite he has written for this nonet reflects his version of global music: a mixture of opera buffa, Italian folk and marching songs, romantic pop, so-called classical music and a large parcel of jazz improvisation.

Nomenclature be damned, however. Global Music is a stirring showpiece for the pianist's compositional skills that, in four lengthy compositions, utilize every one of his influences, flinging them together in a dense -- and very palatable -- mass. Separating the orchestral blow-outs are four miniature and airy dual-cello interludes, which serve the same purpose an amuse-gueule of sherbet does between courses in a hearty French meal: as an airy interlude to set you up for the substantial fare to follow. Theatrical and splashy as only someone hailing from the birthplace of opera can be, Occhipinti's major compositions have a certain heft to them, and are decorated with the many orchestral colors he has available to him with nine plus instruments. The plus is Palermo-born clarinettist Maurizio Maiorana, whose tenor singing voice is used for little arias, both wordless and with Italian lyrics. Whether you understand the language or not is unimportant, since the key to those songs is the vocal blend with the tunes and instrumentalists. And what sounds they produce. During the course of "Allegro Ibleo Con Ninna Nanna," for instance, the disc's showpiece at nearly 26 minutes, the tempo shifts from march to swing to free to jig and back again. Philharmonically-voiced string and horn passages follow a straight ahead jazz motif with carefully accented snare and cymbal zaps and bop piano runs, Earlier passages move among raucous gutbucket trombone, quasi-Dixie high-note trumpeting and the clarinets' approximation of a tarantella. From time to time the dramatic Maiorana asserts himself, switching from a soaring operatic pitch to lyric reading that approximates a Virgilian Jacques Brel.

It does help, of course, to have some of the country's most accomplished musicians on board here. Trombonist Lauro Rossi, like Occhipinti and bass clarinettist Carlo Actis Dato a member of trumpeter Pino Minafra's all-star Sudori combo, can measure the bar lines in strict tempo with a proper sound as easily as he plays freely. Reed madman Actis Dato, who is also known for his contributions to the Italian Instabile Orchestra and his own bands, is never at a loss for notes or ideas. Violaist Paolo Botti can put a folksy sheen on his tone on "Canone," then seemingly effortlessly soar over the massed ensemble as he does on "Danza Del Canto Supremo." One minute trumpeter Luca Calabrese, who first learned his trade in a wind banda, is making like an Italian Cat Anderson on "La Genesi Del Kaos," pushing higher and higher notes out of his horn. Shortly afterwards he's amplifying the Latin motif of "Canone" to such an extent that you next expect someone to yell "cha cha cha."

Despite its title, that tune, which is lively from beginning to end, comes across with a boogaloo beat following an introductory theme, that could be used on a TV cop show. While chaos may be created with blended horn section explosions and the many free passages -- not to mention Siracusa-based drummer Francesco Branciamore's apocalyptic kettledrums on "La Genesi Del Kaos," some of the earlier compositions switch between parade rhythms and Kurt Weillian-style waltz time. Occhipinti is no slouch as a pianist either. When he takes centre stage, he can easily create some flowing Herbie Hancock-like contemporary keyboarding. Elsewhere he caresses compositions with right-handed glissandos. A number of impressive European and North American orchestral projects have been released recently. With his creative mixture of inspiration, swing, humor and high musical standards, the pianist's disc certainly deserves to take its place near the top."
Ken Waxman

"Pianist/composer/conductor Giorgio Occhipinti and his “Hereo Nonetto” (nonet) invites the listener to partake on a ubiquitous journey consisting of disparate musical notions and multifarious implementations in concert with intermittent strings sequences (“Cellos Sequences”) by cellists Tiziana Cavaleri and Vito Amatulli.

The leader’s suite in eight movements titled, Global Music and Circular Thought features beefy trombone parts, stately themes and intertwining movements as the artist frames his works around geometric and interleaving patterns often brimming with sonorous interludes, modern jazz interplay and cascading rhythms. Occhipinti touches upon concepts pioneered by Gershwin, Ellington or perhaps Aaron Copeland within the scope of his rather expansive vernacular, where the band often launches into medium tempo swing vamps or harmonious choruses, awash with bustling strings and serenading motifs. However, on part eight, the musicians’ engage in spurious free-jazz dialogue amid chamber-like passages and episodic movements. Essentially, this recent release prevails as an altogether impressive – Third Stream – type affair, thanks to Giorgio Occhipinti’s cleverly constructed and richly thematic arrangements along with the musicians’ rousing performances. Recommended."
Glenn Astarita (All about Jazz)