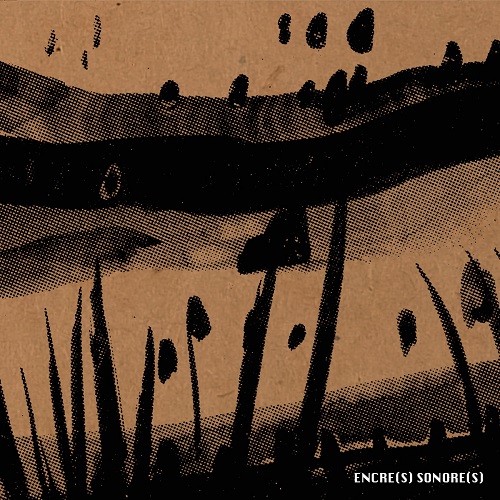 Recorded live "with and without an audience" this album of improvisations is "accompanied" and inspired by the live projected drawings of Christophe Forget. Without seeing the final artwork it's hard to know how this will be presented to the listener but the recordings do seem to reflect abstract landscapes.

Throughout the album there is a compelling contrast between the human sounds of the sax and bass and the "machine" elements of electronic sound manipulation. Stephane Decolly's bass is vividly recorded and provides a welcome celebration of classic Fender bass tones, including some chiming bent harmonics. Julien Behar's saxophone playing displays rich tone and warm phrasing; if you took away all the electronics this would still be a fine session but the electronics add a lot.

These are not completely "free" improvisations because both musicians are credited as composers for tracks 1, 2, 4, 6 and 8, whilst Behar alone is credited for 3, 5 and 7. Each track has a clear narrative and the players don't shy away from repetition; there are even some "hooks"!

"Encre #1" begins with a wide-screen soundscape in free tempo, featuring treated sounds of both instruments with plenty of ring-modulation and mechanical noises. I was reminded of Joe Meek's "I hear a new world", possibly because of the "spring reverb" effects. "Encre #2" begins with an expressive sax recitative, again swimming in reverb and bouncing echoes.

"Evanescent" features bass making structural use of reverse echo then moves into an insistent riff based on a minor third as the sax joins. Just as it starts to get slightly "Austin Powers spy theme" the bassline modulates and ends. "Encre #3" builds a crescendo of free tempo sax and cacophonous bass pulses but is only just over a minute long.

"Mockba 80" opens with a glitchy tremolo bass drone then some impressionistic sax worthy of Jan Garbarek. The bass rejoins with a subtle riff in 11/8 time which the sax winds around sinuously, both players improvising some imaginative modal shifts. "Encre #4" is built on a droning polychord over which sax and bass stage an animated conversation, highly reverberant at first then becoming close-up as an oblique walking bass begins.

"Celerite" begins with that infectious Casio VL-1 rhythm box sound, playing an unusually syncopated pattern, soon joined by a funk bass pattern and densely harmonised sax chords. This is again delightfully glitchy and a lot of fun; I bet it went down a storm live but it's also offbeat enough to reward repeated listening for over 7 minutes. It subsides to another eerie industrial soundscape for "Encre #5", ominous at first but slowly settling into a long hypnotic fade.

These recordings are sufficiently varied that interest never flags, the playing is beautiful yet edgy, the electronic effects multi-coloured and inventive. Very enjoyable and well worth a listen.