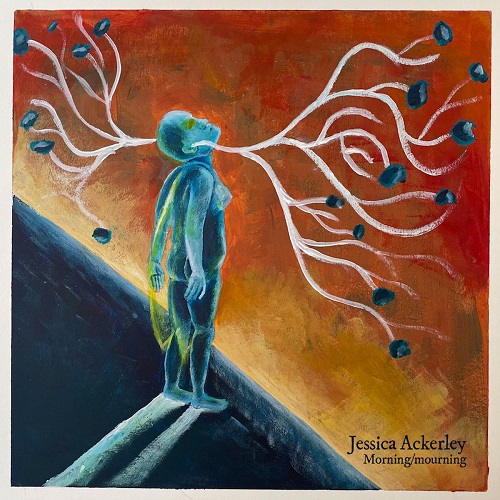 At first listen I disliked this album but it's grown on me a lot! Trying to "review" free improvisation sometimes feels like a fool's errand. Surely the whole point of the genre is to get beyond tired concepts of musical correctness and create with no inhibitions? And there is a world of difference between "live" and recorded free playing; with an audience the performer's body language plays a big part, as does the dynamic between performer and audience,  and this is all further complicated by the number of players.

Guitarist Jessica Ackerley often uses effects and distortion live, and is known for playing her Stratocaster with frenetic energy, but this album shows a more restrained and reflective side, still using her trademark fast picking and semi-damped harmonics.

A solo CD of free playing created solo in a musician's home is quite a rarefied thing; it is clearly intended for repeated listening and critical evaluation. Although a lot of jazz is about interaction between musicians, a solo outing is often about interaction between the musician's conscious and unconscious mind. That is something which Ackerley achieves consistently through the 9 tracks on this album. She belongs to the school of free playing which values a compositional element - her vision is more like Sun Ra than the expressionist approach of Peter Brotzmann or the pure spontaneity which Derek Bailey aimed for. Ackerley has developed these pieces in various performances across North America, gradually honing their blend of mapped-out and spontaneous material.

The first track is not an easy point of entry; it's based around the open first and second strings which are just enough out of tune to make clear this is intended rather than carelessness. For any guitarist who has tried to tune a guitar by ear at a noisy gig this induces a Pavlovian response of horror and discomfort. Through the album there is a lot of tension and not much release. Once you get past that each track is cleverly structured as a set of variations, there is a lot of development and incident so the listener's interest never flags.

The recording combines the electric guitar signal with a microphone picking up the semi-acoustic sound of the guitar, which puts the listener right in the musician's private world. It's an intimate and unvarnished sound. This works well on tracks like "Inner automation" with its fast repeated notes and free tempo, and "Departure Into Sound Memory" with semi-damped strings, pinched harmonics and expressively varied attack. It's less easy to listen to on a track like "Henry" with open strings and pickup switch effects which cry out for some ambient space - but that's a fair artistic choice if the aim is to discomfort the listener.

The album's presentation is cryptic, with titles like "Coaxial 11" and "Untitled 3" and cover paintings by Jessica herself of stylised female forms.

This is expressive and inventive music but not for the faint hearted. It's available to listen to on Bandcamp and I found it fascinating to contrast this album with videos of Jessica's live work available online.