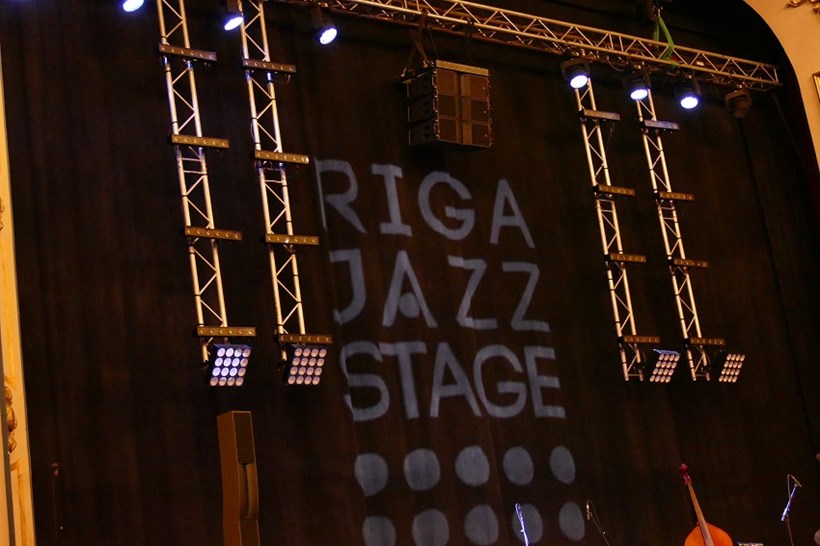 Riga Jazz Stage (RJS) is a contest for young jazz musicians (not older than 33 years) organized by Latvian Contemporary Music Center since 2004 in the category vocal plus an annually alternating category. This year the second category was drums. 12 vocalists (all female) and 12 drummers (all male) from 12 countries (Latvia, Lithuania, Estonia, Denmark, Poland, Ukraine, Slovakia, Germany, Turkey, Italy, UK, USA) participated.

For the application three pieces had to be delivered: two jazz standards (uptempo and ballad for the vocalists, a standard performed with brushes for the drummers plus a free choice piece for the vocalists and a drum solo for the drummers). Those who passed the primary selection showcased their talents by performing one piece of maximum seven minutes in the first round.

These 24 participants were accompanied by the Riga Jazz Quartet comprising Kristaps Vanadzins (p), Rihards Goba (g), Jānis Rubiks (b), Mikelis Vīte (dr) in Riga’s Splendid Palace Theater (Elizabetes Iela 55). This quartet coped excellently with the challenge of a great variety of ‘others’, of a greater variety of musical pieces and musical personalities excellently. 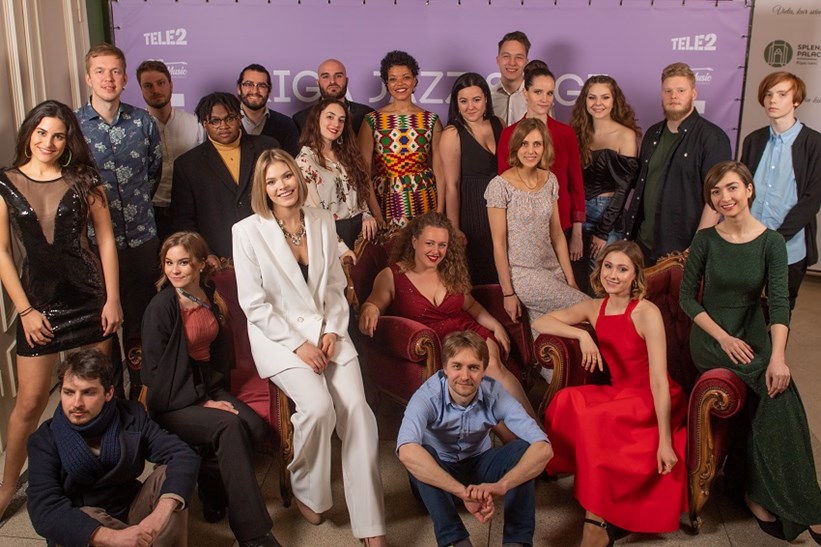 In the final of the second night the participants had to perform two entirely new pieces of in total 10 minutes. Seven of the vocalists entered the final: Karīna Laugale, Katrīna Kabiņecka and Paula Saija from Latvia, Amanda Becker from Germany, Louise Balkwill from the UK, Eylül Ergül from Turkey and Valentina Fin from Italy. 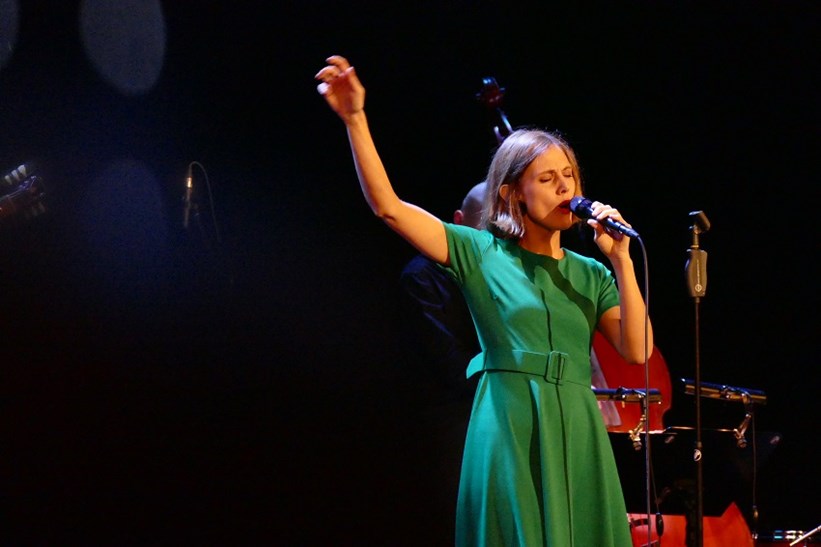 Of the drummers six reached the final: Mareks Logins and Pauls Pokratnieks from Latvia, Matias Fischer-Mogensen from Denmark, Yannick Ballmann from Belgium, Giovanni Paolo Liguori from Italy and Domo Branch from the USA. 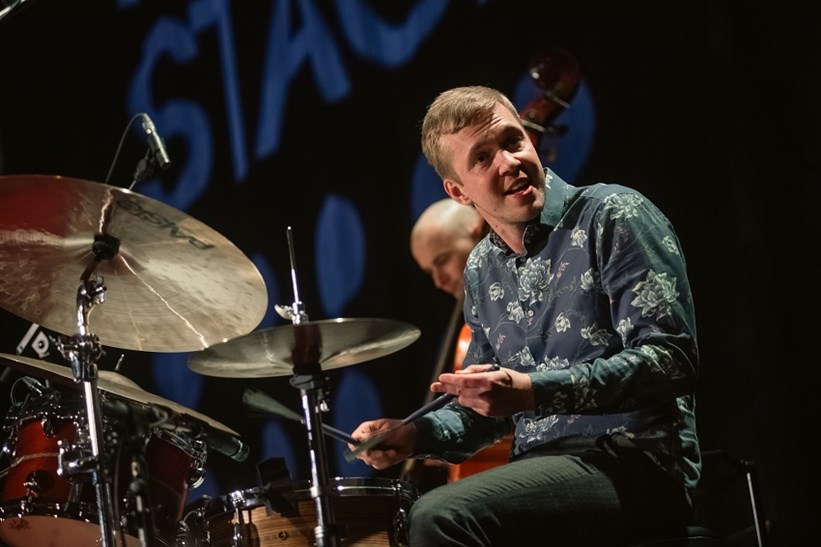 Such a contest provides lots of opportunities to Latvian musicians to mirror themselves in the work of international colleagues and built their own network with fellow musicians from other European countries and the USA on the basis of physical meeting. Drummer Domo Branch clearly expressed that in his words when accepting his price: “I’m very happy and glad that I won but I really don’t think of it as much as of a win. I think everybody won. I think the prize of this competition was that we all got to meet new people here. So many different varieties of music. People’s original music to the arrangements of the standards that they played. I’m from the US. I’ve never met anyone from Turkey or Lithuania, or Latvia. So, it was amazing to meet all these people. I actually had nice conversations with them about life and just being together. I think that’s the win. An overall prize of this competition. So, yeah, I won, but we all won as a group of contestants.” 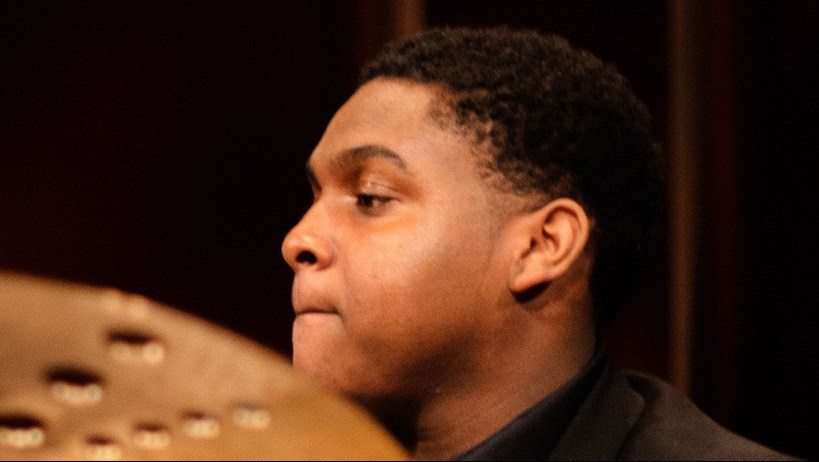 Of course such a contest goes along with a greater variety of voice characters, ways of singing and variety of repertoire. Singing is a core expressive form in music. Also instrumental expression derives from it and refers to it. The voice is at the heart of humans’ personality. Not for nothing is 'person' a sonic concept deriving from Latin 'per sonare’.

When singing jazz, the basic tonal qualities of one's voice fuses with its personal traits and cultural imprints and must be moulded in jazz forms and jazz dynamics in order to evoke permanent touching effect on the audience. Simply spoken a vocalist can loose something of her/his vernacular when migrating into jazz expression or - on the opposite side - jazz expression can be enriched by indigenous traces. This became apparent in the performance of Turkish vocalist Eylül Ergül. Her first song was a strong example of enrichment by indigenous traces while in her second song those indigenous traces were absent and the performance felt weak especially in that succession.

My personal favorite of the Latvian vocalists was Katrina Kabinecka. Her strongly articulated tonality and clarity delivered a clear Nordic touch in her jazz singing. Italian vocalist Valentina Fin took the highest risk by finding her own expressive free form of vocalise and integrating it in the song form for a personal lament. Louise Balkwill, already tried and tested in performing practice,  proved to be the most impetuous voice coupled with a strong gift and versatility for sweeping and overpowering the audience. With great joy and high dynamics she utilized a broader range from entertaining showmanship means - a bit in the Bette-Midler way - whereby the quality of the song fell by the wayside from time to time. 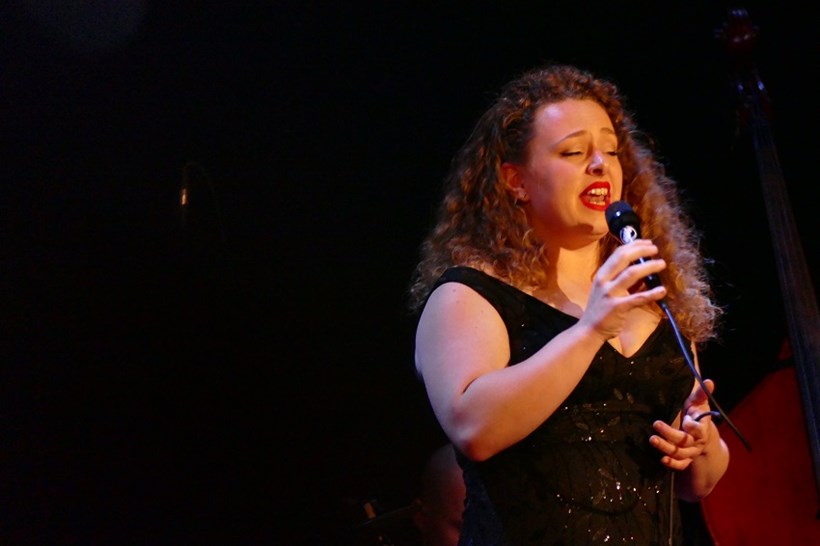 Functions and possibilities of the drums are manifold. It ranges from the classic swing drummers that can be felt rather than heard to thunderous drum giants, from subtle percussionists rustles to the force of rain patter, from sharp time keeping to polyrhythmic uplifting and space-creating playing around.

One drummer chose a Michael Jackson songs which gave him a hard stand with a jazz quartet: a challenging exercise to see how deep, far and high you can get. It was not lost but also not won. The other drums delivered very fine subtle, coloring and accentuating drum work. Two drummers however clearly stood out, however in quite different ways: Pauls Pokratnieks from Latvia and Domo Branch from the USA. Pokratnieks was the vital drummer of joyous and virtuosic acting from behind and above his shining machinery with great unlimited splendor. Branch was the creator of space and waves, of sophisticated highlighting and uplifting and took care for letting the music grow, turn and climax. And as a truly remarkable virtue, he played in such a way that he made the musicians of the ‘accompanying' quartet shine individually as well as as a group. Both were extra qualities that ran through his complete performance and was also reflected in the way he talked to his audience. 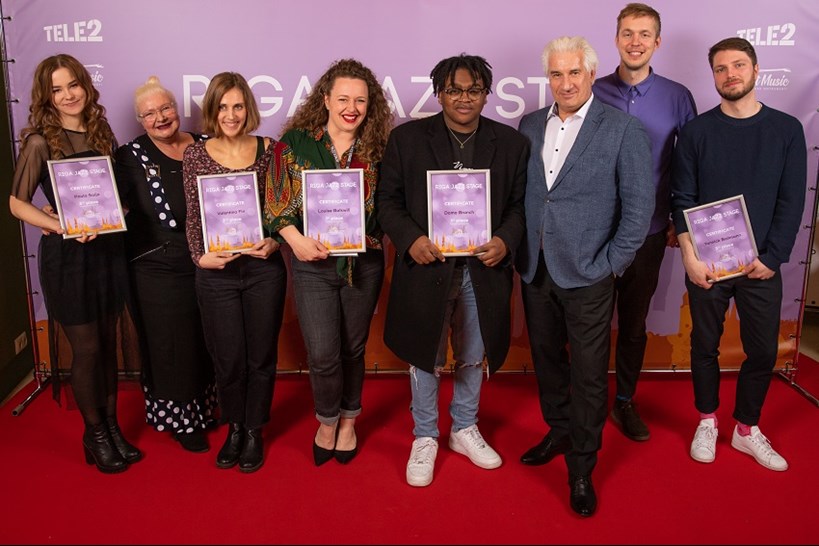 The ultimately chosen ones (laureates)

There were four awards: the two general awards, the International Journalists’ Award and the Audience Award.

The Vocalist Awards went to:

The Drum Award went to:

One of the most important gratifications for the laureates were festival- and club invitations by Rīgas Ritmi Festival (Latvia), Ronnie Scott’s Jazz Club in London (UK), Nardis Jazz Club in Istanbul (Turkey), Visioon Festival in Tallinn (Estonia) and Kaunas Jazz Festival (Lithuania). 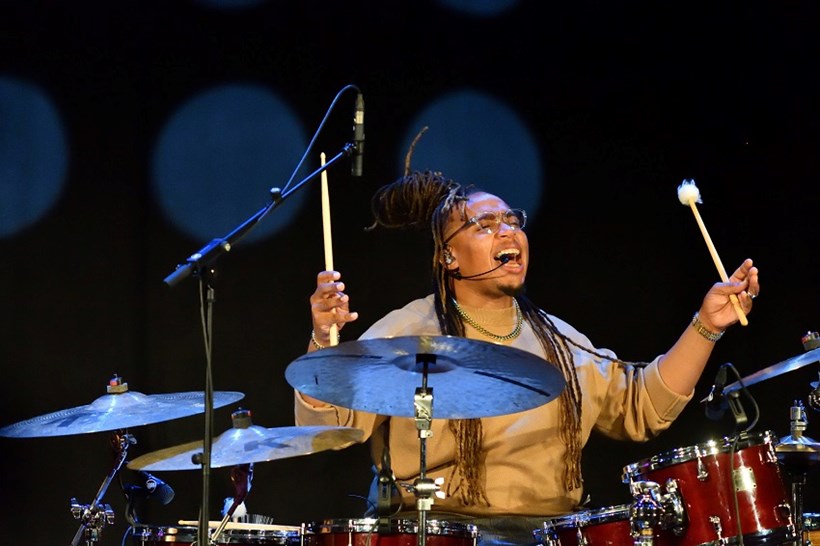 Jamison Ross acted as Artist in Residence of this edition of Riga Jazz Stage. He gave a workshop, was a jury member and delivered the closing concert with his organ trio of Cory Irvin (org) and Rick Lollar (el. g). He opened the concert standing behind his special drum kit as a percussionist talking, singing and drumming. It was an unusual sight and it soon became apparent that Ross has a beautiful flexible gospel voice. The first association therefore was that of good old tried and true soul jazz.

Over time, it however revealed that there was much more going on. Ross succeeded impressively to involve the audience as active contributors and players and thereby organically kindle great communal energy. Being skeptical myself about cheap tricks of audience participation, his approach revealed as something else: a carefully used talent of seizing his audience into common celebration. To the well-known song material he worked with, he time after time gave his very own twists and used it in great ways as vehicle in turning his audience into actively contributing characters in togetherness. 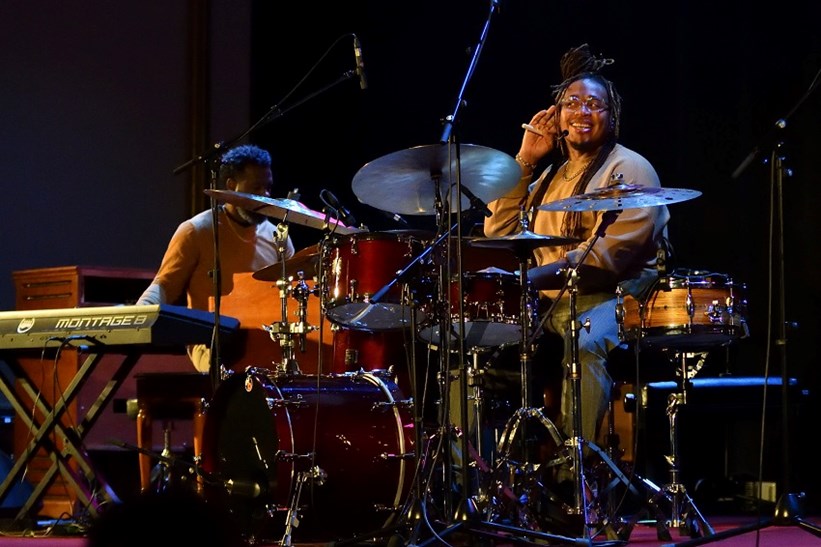 The organ trio, a perfect format for this, acted with great suspense and dynamics. It turned out as a skillfully built dramaturgy leading into a gorgeous finale.

The unification of voice (talking and singing) and drums was realized greatly in an unexpected way. While there were more singers, who were also great drummers - like Sammy Davis jr. or Chaka Khan - Ross unifies both in a way that also extends what Vinx did a time ago. Residing in New Orleans, Ross released his debut album on Concord in 2015, won The Thelonius Monk Competition, earned a grammy nomination and was a 'Rising Star' in the critics poll of Down Beat in 2018.  So the game is opened.

It was a great instructive springtime experience in a city of the Hanse that is/was not afraid of grandeur and integration of a multitude of cultural sources and styles. Between rain and hail showers the city shone under lightning-blue sky and bright sun and cast long shadows - coincidentally or not also the colors of the Ukraine, which were ostentatiously omnipresent in every corner of the city as a clear sign towards the country’s eastern neighbor.

The annual contest is a productive concept for network building and maintenance and opens chances for young Latvian musicians make and build connections in lively way to musicians from others countries as well as mirror themselves in varieties of musical cultures and approaches. A busy communality sense could well be sensed.

It is a choice of musicians from various countries over the world to go for contests and apply for it. It is a pre-selection that cannot be influenced directly by the organizer. As a result in this edition there were only females in the vocal cohort and solely males in the drummer cohort - an extreme affirmation of long ingrained role distribution in jazz. The organizers should find means to push the contest's application procedure into the direction of pattern breaking and extension of musical variation.

One of the extraordinary components of the contest was the participatory role of the group of invited journalists. It rarely happens that journalists with their expertise are respected and requested by a festival to - additionally to presenters, bookers etc. - give their vote on musicians. It is a practice that deserves praise and following.

Jazz is a worldwide spread highly varied field of music making with some basic constants, guiding principles and leading figures from the past and present. This entails that there are numerous cultural adaptations of jazz idiom(s), of handed down works of the past, evergreens, standards etc.. It could be sensed in the contest too, even when participants stuck to classics and delivered their version. The contest also showed the crucial role of dramaturgy and interactional roles - especially striking in the contribution of the musicians of Afro-American descent with a socialization in the Afro-American community - an interesting ear- and eye opener.