In 2005, 2007 and 2009 (alternating with the Jazz!Brugge festival), De Werf staged the Flemish Jazz Meeting. The aim of the event intended for jazz professionals is to promote jazz made in Flanders and Belgium and getting home-grown jazz artists exposure and gigs across Europe. A jury consisting of some fifty concert organisers and journalists decides on a shortlist of twelve bands that are offered the opportunity to convince those in attendance that they are made of the right (international) stuff by way of a showcase gig.
The fact that this method of operation is a success goes corroborated by the large presence of Belgian musicians at the Budapest Jazzforum (previously known as the MOL Jazzfestival) The organisers (the Budapest Music Center) have been loyally attending the Flemish Jazz Meeting ever since its inaugural edition.

Tamás Bognar and his team are not the kind of people to eschew bold moves. The pairings of foreign and Hungarian musicians usually result in a series of unexpected and coherent ensembles. Something which we were able to find out for ourselves especially at the concerts staged at the Trafó Arts Centre (where FES and Aka Moon feat. Babo Sissoko are also set to play on 16/10), with cymbalom player Miklós Lukács as the event’s central guest for three days. These were also the festival’s highlights. The Ozone Trio (Christophe Monniot, sax/electronics, pianist Emil Spányi and drummer Joe Quitzke) + Miklós Lukács presented an astonishing mix of tradition and electronics. Before the Ozone Trio hit the stage, we had already been enjoying the excellent Pulcinella + Dzsindzsa, a combination of a French and a Hungarian band: two bass players, twee drummers, two reed instruments and one accordion, bringing alternately steaming, exorcising and subtle music drawn from a varied range of different influences (rock, reggae, folklore and rock ’n roll). A delightful gig. 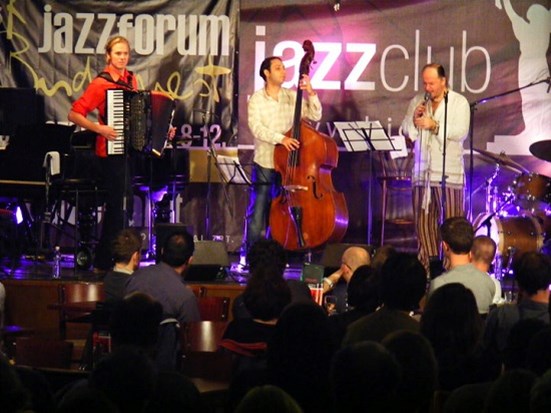 At the Budapest Jazz Club, the trio consisting of vocalist Gábor Winand (a man endowed with the timbre of Tim Hardin), double bass player György Orbán and Tuur Florizoone had already taken the stage: a felicitous concert which enabled all three players to shine in turn in equal measure, leaving each of them plenty of room for improvisation. Sheer class. The day was wrapped up by a quartet made up of two scions from the Lakatos dynasty (pianist Róbert Szakcsi and bassist Krisztián Pecek) and Dré Pallemaerts and Bert Joris. The four of them played a nice set which saw some particularly apt interventions by the pianist and a very dynamic Dré on top form. On the opening night too, Bert Joris stepped forward as a soloist with the Modern Art Orchestra headed by trumpet player Kornél Fekete-Kovács. In amongst other songs, the latter performed a dazzling version of “Mr Dodo”. The second soloist was Spanish saxophonist Perico Sambeat who played the gorgeous “Nido del Aire” (from his ‘Flamenco Big Band’ CD - Verve, 2008) as one of several.

Grencsó Open Collective with American alt sax player Lewis Jordan opened the second Trafó day with a tight and sparkling set with two bass players on board. They were followed by the Trio BraamdeJoodeVatcher which was expanded with violinist/trumpet player Ferenc Kovács and Miklós Lukács, again evincing of optimal interaction between the musicians on stage. Same as of the meeting with the Ozone Trio (‘This is C’est la Vie’, BMC CD 163), a previously recorded studio CD has been released (‘Quintet’, BMC CD 179). 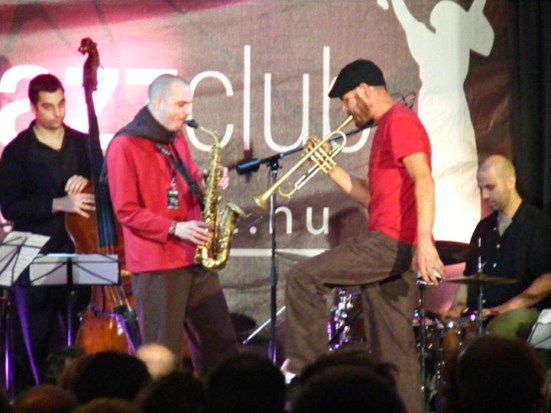 In the meantime, the encounter between the trio of unsurpassed alt sax player Viktor Toth and Belgian trumpet player Bart Maris had already got underway at the Budapest Jazz Club. Mátyás Szandai is one of the best Hungarian double bass players around: a beautiful sound, on-the-ball responses to his fellow players and delectable solos. Together with Swedish drummer Robert Ikiz, Szandai made up a solid rhythm duo. Snippets in Ornette Coleman ambience (early years) were heard alternated with sometimes ethereal electronic manipulations. A gorgeous concert! The Dániel Szabó Trio with superb Polish trumpet player Piotr Wojtasik in their ranks rounded off the evening with a top-class mainstream set. Here too, double bass player Szandai who turns out to be a true chameleon, was seen to excel himself.

The horn players of Maäk’s Spirit (Blondiau, Van Herzeele, Massot and Orti) in combination with guitarist Gábor Gádo, bassist József Barcza Horvùath and drummer Tamás Geröly got proceedings underway on the concluding Trafó night. In spite of its magnificent soloists, the ensemble lacked coherence. The Hungarians were blown off the stage. This was presumably down to insufficient rehearsals. Nonetheless Jez Nelson and Russell Finch from BBC Radio 3 Jazz were impressed with the quality offered by ‘our boys’ and with good reason. A missed opportunity. What this gig lacked could be heard from the quartet consisting of German singer Michael Schiefel (what a voice!), Danish pianist Carsten Daerr, cymbalom player Miklós Lukács and the ineluctable Mátyás Szandai, playing music by The Police (Tea in the Sahara), as a homage to Sting’s band, Mendelssohn and J.S. Bach. Absolutely wonderful and the absolute highlight of the entire festival! The quartet also has an excellent CD out entitled “Gondellied in the Sahara’ (BMC CD 173). Brilliant! At the Budapest Jazz Club, the Albert Sanz Trio was heard bringing traditional organ jazz. The Marti Serra Quartet with tenor saxophonist Gábor Bolla amazed listeners with an electrifying tribute to John Coltrane. A worthy band to round off proceedings. 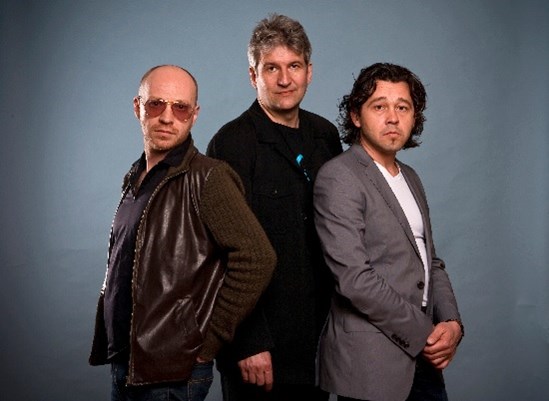 The last night of the festival was held at the beautiful Muvészetek Palotája (Music Palace). The trio consisting of Hans Lüdemann (D), double bass player Sébastien Boisseau (F) and drummer Dejan Terzic (Serbia) beguiled the audience with a very beautiful concert. Lüdemann is a much underrated soloist who merits a place on the bill of our festivals. It is nothing short of spectacular to hear how managed to weave African rhythms into his set. The festival was closed by the Mihály dresch Quartet with bassist Szandai, and Americans Hamid Drake (drums) and Lafayette Gichrist (who plays piano with David Murray amongst others).

The importance of meetings such as the Flemish, Dutch and Bremen Jazz Meeting, was clearly underscored at this festival. Events like these serve to drive forward and improve contacts between the various European jazz scenes. No one doubts the sheer artistic qualities of European jazz, but people only have a very minor awareness of what is on offer. Because of the paucity in attention from the media and the virtual absence of any specialist press in many countries (including in Belgium), awareness among your average European jazz enthusiasts is confined to their own, national scene and the big names from the United States. Which is why presenting other European artists at the various jazz festivals that exist is indispensible to bolster the continued growth and development of jazz music at and from the old continent.