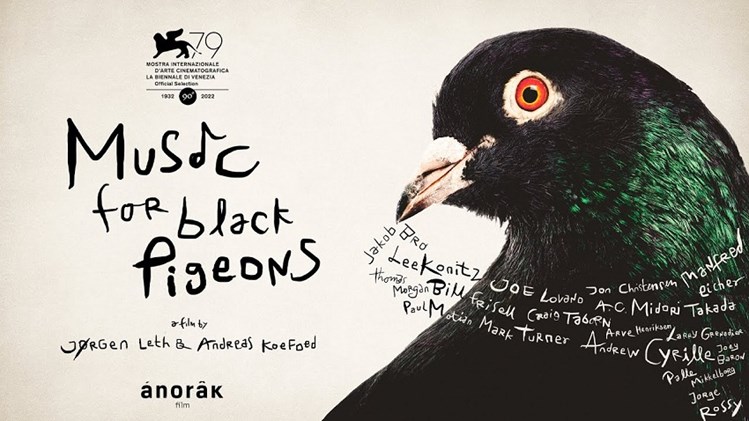 The music documentary MUSIC FOR BLACK PIGEONS is a a truly astonishing and moving cinematic WONDERWORK of high musical sensibility fully captivating all senses 90 minutes long until the last scene! It is a deep work evoking many smiles, also laughter, fun and giving touching insight in processes of music making!

I saw the screening of it during the International Documentary Festival Amsterdam (IDFA) 2022 in impressing cinemascope format. Afterwards the exciting experiences did not sink easily to the back- or underground of my mind. Certain scenes kept popping up again and again in different combinations. At moments this docu felt like a fairy tale and it IS a fairy tale. But also very real and thus firing our phantasy (and becoming more real).

I went to the first and last screening of this documentary at IDFA, the International Documentary Festival Amsterdam with musical friends. The other screenings were sold out (I guess by word of mouth). The second time went still deeper. Tears were flowing … The episodes touch on higher questions in such a down-to-earth way! For instance, when Lee Konitz (1927-2020) leaving the Taseralik Culture Center in Sisimiut, Greenland, notices an unguarded baby in a stroller outside. He is surprised to see the baby  ‘left alone’  there in the cold. A lady then tells Konitz that it is normal to do that in Sisimut: “The father is inside the building to buy vinyl records. The baby blissfully sleeps and is even snoring.” Puzzled Lee walks towards the stroller to check it. And indeed the Inuit baby, wrapped up warm, sleeps blissfully softly snoring. Lee looks in astonishment for a moment and then wishes the baby a happy life before entering the car with his bag containing his alto saxophone. It’s a little daily life scene having a deep impact when perceived within the wider context of the documentary.

The scene was shot in Sisimiut the second city (5600 inhabitants) on Greenland after the capital Nuuk. Sisimiut was part of the Nordic Balladeering Tour of Jakob Bro’s group with Bill Frisell, Lee Konitz and Thomas Morgan. It went from Faroe Islands, Iceland, Norway and Greenland back to Copenhagen in May 2015. There is a piece „Sisimiut“ on Bro’s album STREAMS from 2015. It’s on YouTube Premium.

The documentary has a masterly rhythmical cut. Effortlessly criss-crossing, it draws lines between musical lives. It’s significant and touching even when you are not familiar with some of the persons. It’s a documentary about living for music, with music, and by music. Quickly changing it wanders from little moments like the just mentioned to other elucidating ones. Laying embedded in the quiet, trustful flow of Bro’s music these moments mutually illuminate each other. The music gives space to the successive episodes and binds them. It is significant that in the documentary’s course the creation of Bro’s piece honouring  trumpeter Tomasz Stanko (1942-2018) emerges from a scene where Bro plays with his little son.

The jump cuts of these moments continuously open surprising, touching turns that draw the viewer deeper into the temperaments and personal life sides of the musicians. Especially the character of Lee Konitz and his special creativity gets contour this way. It is a trade mark of Jørgen Leth’s narrative style that is fusing here with Bro’s musical flow and Andreas Koefoed’s dynamics in productive, illuminating ways keeping tension and flow.

There are lots of these moments: in the recording studio, at home, during travels, that come alive through being combined with each other in that special surprising way thereby casually revealing deeper layers. Sometimes there are just the mutual joyful gazes of the musicians at the end of a take in the studio - as for example when Paul Motian proposes to play a piece again and slower. It’s a magic moment but it is not lengthened or heightened but leads into the next jump cut. There is no hierarchy in the cuts and just that creates the magics here. A lot of filmed everyday life situations get significance through their connection with different kinds of pictures, for example musicians’ self statements given in front of a blank wall. It wouldn’t be good to tell more about the kind of magic ‘moments’ in the documentary. Doing it would damage the discovery experience of future viewers.

It all comes forth from the the special way Koefoed and filmed where and when, thereby collecting sensitive material from which this concentrated, magical documentary  could be distilled and assembled. It is a fantastic, productive combination of method and intuition at work here. The oldest footage is from 2008 when Andreas Koefoed started to follow Bro by filming. Leth came in from 2015 on. Then the making of an extensive documentary got shape.

Towards the end, the genesis of the title of the documentary is revealed in a touching scene with Lee Konitz who time after time turns out the center of the narrative. The docu extends into the time of the Covid pandemic. Lee Konitz (1927-2020) active musician until the very end of his life, became a victim of COVID and died in April 2020.

The documentary shows that Bro has a special gift to gather people in music making that goes beyond the conventional recording or concert situation. It apparently brings musicians who join and commit themselves to it, enter a primal situation. And, in a way with the documentary the same can happen with viewers.

The docu will be screened at Flagey :