25 musicians from the United States, Caribbean and Africa each compose a song to fight against systemic racism in the world

Music is a solid freedom. It is vital. It unites us.

It helps us handle fear and anger and brings us joy.
Music was an essential part of the civil rights movement.

At rallies, in moments of victory and even in jail, civil rights leaders
and participants turned to music to boost their morale and bring people together.

Black artists have played an essential role for hundreds of years
in shaping American music and in battling inequality and racism.

Sadly, their songs are still relevant. The deaths and injustices keep on coming.

“BLACK LIVES - FROM GENERATION TO GENERATION“
is a collective of artists who are continuing to fight for
equality and social justice through music. 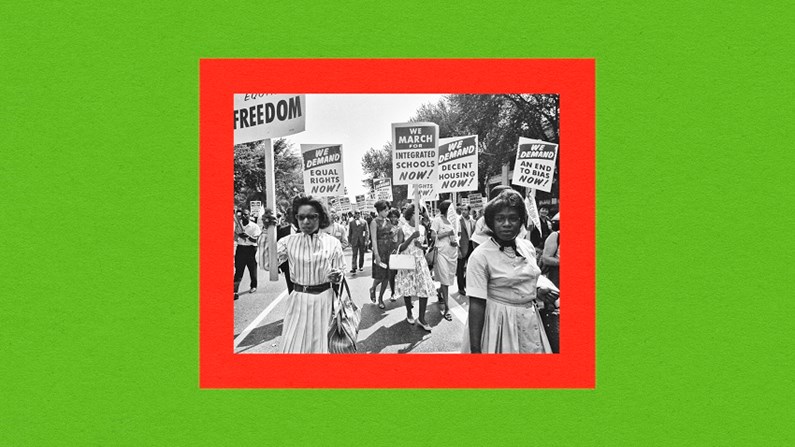 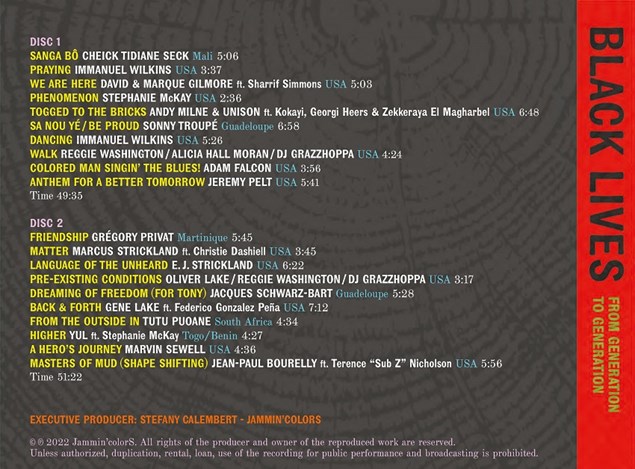 ABOUT BLACK LIVES - FROM GENERATION TO GENERATION 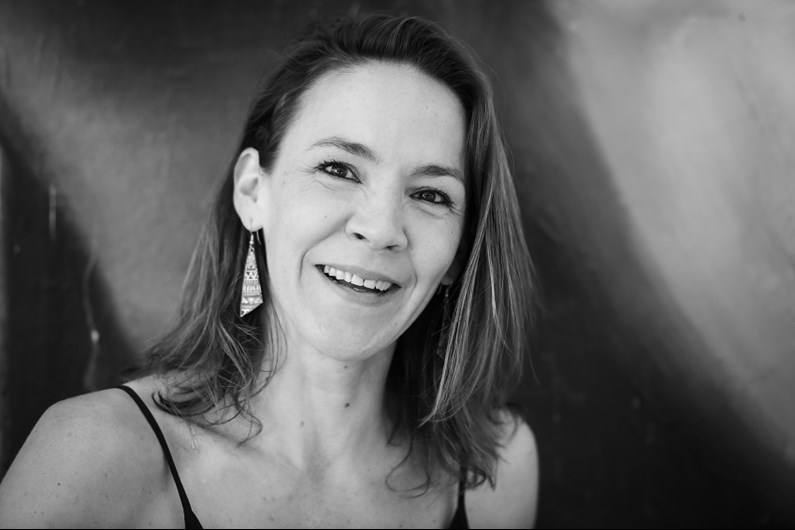 The impulse behind this project is to give black lives a voice and to listen to what they have to say in 2021 - 2022.

I have witnessed racism all my life and have often been deeply disturbed by the air of superiority and the hypocrisy of white people. Even those who are not racist usually feel uncomfortable discussing the issue of racism, which remains a very taboo subject and a social ill we largely deny.

As a white person, I wanted to do this project to open a dialogue about this worldwide mess. All too often the black community is left to battle on its own, but all of us must become aware of the daily reality of racism and the injustice and pain it inflicts.

I hope all the listeners of this album will understand its main message:

Let’s unite against racism through music. Let’s amplify the voice of black lives across different parts of the world, across generations and diverse music styles.

Let’s lift people up and give strength to those who are confronting racial inequalities.

Let’s connect artists, audiences, associations, because the more we are, the more power we will have to bring about change.

With all my heart and under the stars,
Stefany

All the rights and profits of this album will go straight to the talented artists who composed their songs for this cause: THE FIGHT AGAINST RACISM 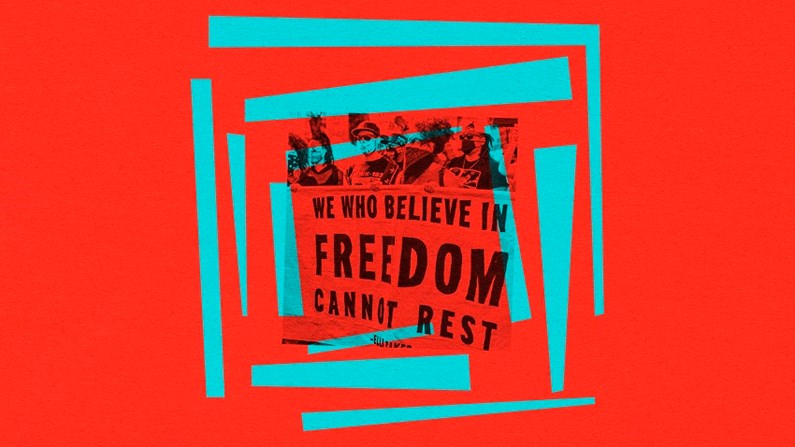 The 25 composers are between 20 and 80 years old and are known for their work as leaders but also their collaboration with world-famous artists from the 60‘s until today. They come from the United States, Caribbean and Africa and their songs draw on many influences, such as African music, hip-hop, jazz, funk, rock, fusion, rap, jungle, nu-jazz, soul, blues, Caribbean jazz, opera, classical music, poetry.

This project brings together more than 60 musicians, who play a large variety of instruments: saxophone, trumpet, trombone, vibraphone, guitar, drums, bass, vocals, piano, keyboards, turntables, ka drums, n’goni, djembe and tama. There is even a choir from Mali, composed of girls 7 to 13 years of age.

On this album, you will listen to brothers, twins, a father and a son, a couple, a mother and son, old friends... 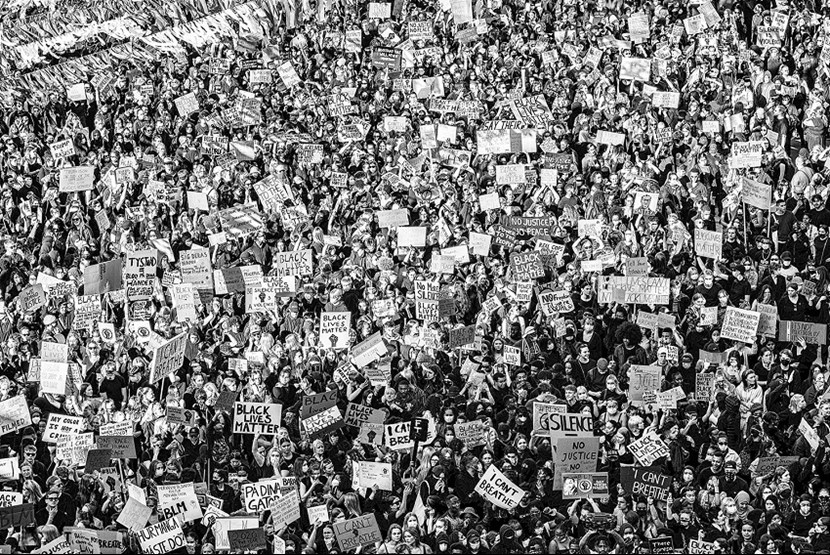 Stefany was born in 1978 in Brussels, Belgium, into a family of music lovers. Her childhood was filled with jazz, rap, funk, rock, classical, pop, African and reggae music. She was 17 years old when she began traveling around the globe, attending concerts and meeting musicians who often explained to her the difficulties of managing themselves as artists. After a car accident in 2004, she spent several weeks in the hospital. During this time, she reflected upon her passion and the role of music in her life. When she was dismissed from the hospital, she was determined to start managing and organizing concerts, and a few months later she created Jammin‘colorS.

Between 2005 and 2020, Stefany organized more than 1500 concerts around the world and released 10 albums on the Jammin‘colorS label. Over the past six years she has also worked as a publicist in Europe and United States.

Stefany lives in Brussels with her husband Reggie Washington and their three daughters.

Three-time Grammy award winning engineer and producer Russell Elevado was born in the Philippines and immigrated with his family to New York City in 1972, at the age of five. He is widely recognized for the sound he created for D’Angelo’s “Voodoo“ album which he recorded and mixed.

His use of vintage recording equipment and analog tape − which gave the album an “old school“ sound but with a modern approach inspired by hip-hop production and sampling − earned him a Grammy Award for “Best R&B Album“ in 2000. Russell has worked with Questlove, the Roots, Angélique Kidjo, Common, Alicia Keys, Jay Z, Rick Rubin, Tony Visconti, Roy Hargrove & RH factor, Erykah Badu and J Dilla to name a few.

Alex is a New York-based engineer and producer. He owns his own mastering house, Alex DeTurk Mastering, and is the resident engineer at The Bunker Studios in Brooklyn, New York.

Born and raised in the north of England, Rebecca moved to New York City in 1989 and then to Jamaica where she now lives. She has designed albums for Island Records, Sony Music, I.M. Pei, WW Norton, RCA, Def Jam, Philip Johnson. She also has photographed Meshell Ndegeocello, Anthony Hamilton, Etta James, Run DMC, The O‘Jays, Sly & Robbie and many more. 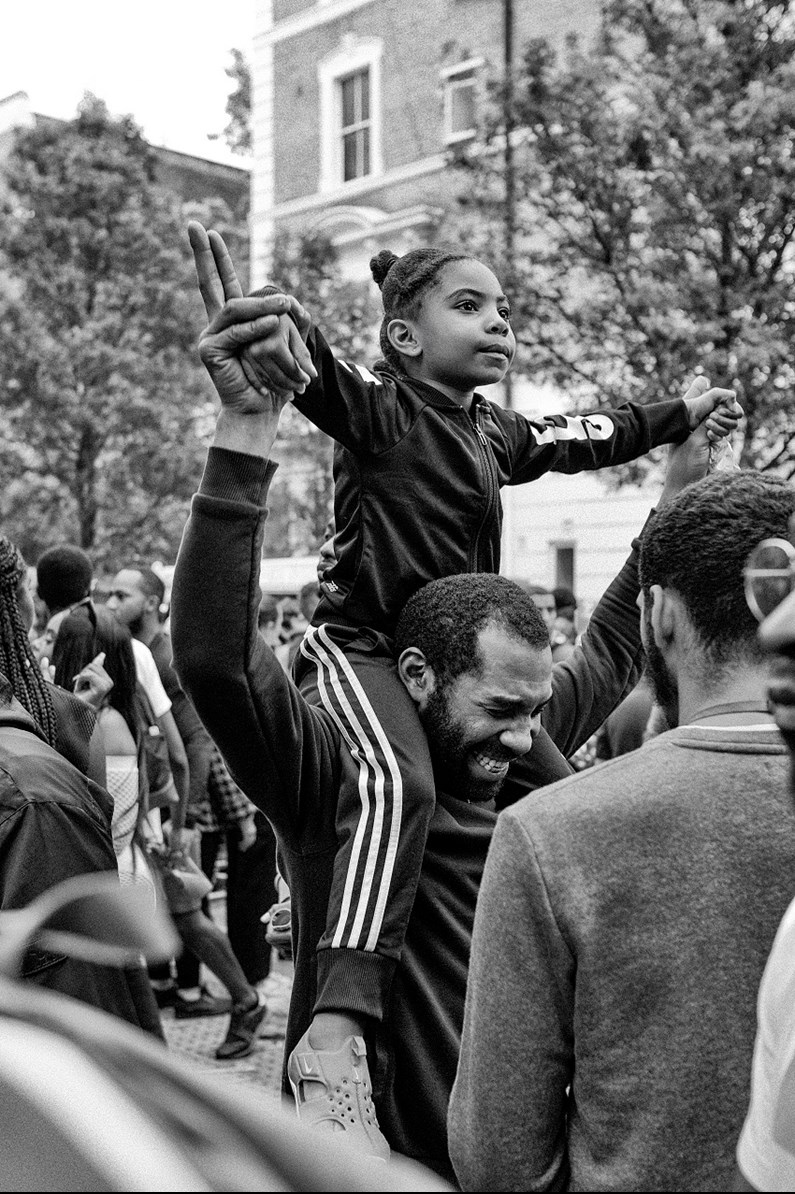 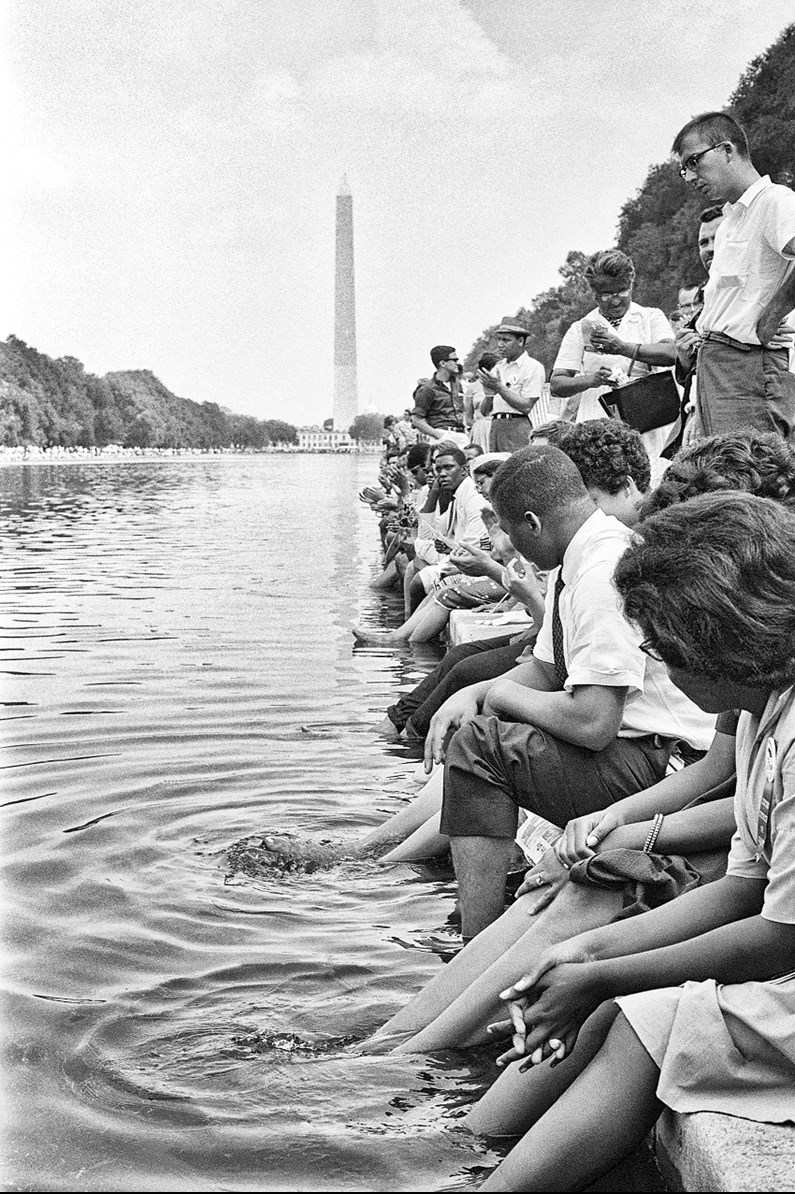 IMMANUEL WILKINS (saxophone)
Born in 1997 in Upper Darby, Pennsylvania
Immanuel aspires to bring people together through his art. The young saxophonist and composer first gained attention in the music biz as an in-demand session and touring musician with acts ranging from Bob Dylan to Jason Moran to Solange Knowles. Now he’s a star in his own right, with his 2020 release “Omega“ on Blue Note Records.

MARQUE GILMORE (drums)
Born in 1966 in Cambridge, Massachusetts
Marque is a highly accomplished drummer immersed in ethnic music. Active in London and New York, he also performs worldwide with Cheick Tidiane Seck (“Tribute to Randy Weston“) and Brian Jackson (“Tribute to Gil Scott Heron“). Marque is one of the founders of the NYC Black Rock Coalition.

DJ GRAZZHOPPA (turntables)
Born in 1972 in Bruges, Belgium
Turntablist DJ Grazzhoppa is an international phenomenon. He has worked with Aka Moon, Brussels Jazz Orchestra, Rainbow Shadow (“Tribute to Jef Lee Johnson“) and Zap Mama. He has created his own band, “Mo & Grazz“ with his wife Monique Harcum.

ADAM FALCON (guitar)
Born in 1954 in the Bronx, New York
Adam is a singer-songwriter and guitarist whose music ranges from R&B to folk.
At age 17 he wrote an instrumental piece, “In Search of a Dream“, for the legendary guitarist George Benson, which became part of Benson‘s Grammy-nominated album “In Your Eyes.“  Later, he wrote a second composition for Benson titled "True Blue" from the Grammy-nominated album "That's Right."
While working for Roberta Flack, Marcus Miller, Steve Jordan, Omar Hakim, Jonathan Butler, Robert Palmer, Phyllis Hyman, Nona Hendryx, he'd perform on all the major stages and festivals opening shows for Eric Clapton, B.B. King, Whitney Houston, Peter Gabriel and a number of great artist around the world.
From recording an album for The Village People to playing with singer/guitarist Jonathan Butler on The Tonight Show, it’s been one big musical journey which still continues today.

JEREMY PELT (trumpet)
Born in 1976 in Los Angeles, California
Jeremy has performed with Ravi Coltrane, Roy Hargrove, Greg Osby and Cassandra Wilson. He has become a preeminent trumpeter within the world of jazz. In 2021 he released his first book entitled “Griot“, for which he recorded the stories of generations of black American jazz musicians.

GRÉGORY PRIVAT (piano)
Born in 1984 in Martinique
Grégory, whose father was a pianist for the Caribbean band Malavoi, was classically trained but turned to jazz and improvisation during his teens. He has worked with David Linx, Jacques Schwarz-Bart, Dominique Di Piazza, Lars Danielsson.

MARCUS STRICKLAND (saxophone)
Born in 1979 in Miami, Florida
Marcus is a soprano, alto, tenor saxophonist and bass clarinetist. In addition to his latest Blue Note releases, “People of the Sun“ and “Nihil Novi“, he has recorded and shared the stage with Roy Haynes, Jeff “Tain“ Watts, Chris “Daddy“ Dave, Christian McBride, Pino Palladino, Bilal, and countless other masters of our time.

E.J. STRICKLAND (drums)
Born in 1979 in Miami, Florida
Enoch Jamal or “E.J.“ is a world-class, world-traveled drummer, composer and artist heard on over 60 albums in the last 10 years. He has had long stints with Ravi Coltrane, Russell Malone, Marcus Strickland and Manuel Valera and has occasionally played with artists like Herbie Hancock, Wynton Marsalis, Cassandra Wilson.

OLIVER LAKE (spoken word)
Born in 1942 in Marianna, Arkansas
As a renowned saxophonist and composer, Oliver has collaborated with Björk, Lou Reed, A Tribe Called Quest, Mos Def, Meshell Ndegeocello, Anthony Braxton, Vijay Iyer, Reggie Workman, Andrew Cyrille. He is one of the members of the World Saxophone Quartet. His artistic talent extends beyond music: he has published two poetry books and exhibits his paintings across the United States.

JACQUES SCHWARZ-BART (saxophone)
Born in 1962 in Les Abymes, Guadeloupe
“Brother Jacques“, the son of two famous writers, lived in Senegal, Switzerland, Guadeloupe and New York before settling down in Boston, Massachusetts where he teaches at the Berklee College of Music. His music incorporates Guadeloupean rhythms, jazz as well as hip-hop influences. In addition to his work with Roy Hargrove and D‘Angelo, Jacques has done studio session work and has performed live with Erykah Badu, Meshell Ndegéocello, Danilo Perez.

GENE LAKE (drums)
Born in 1966 in St. Louis, Missouri
Gene is an all-around drummer who embodies the contradictions of modern music. He was exposed very early to the Black Artist Group, “a seedbed for innovation“ and a collective rally of black musicians, poets, dancers, and artists from all disciplines led by his father Oliver Lake. He has toured with Joe Zawinul, Marcus Miller, Steve Coleman, Henry Threadgill, Meshell Ndegeocello, D’Angelo, Cassandra Wilson, Jason Miles, Screaming Headless Torsos.

TUTU PUOANE (vocals)
Born in 1979, in Atteridgeville, South Africa
Tutu studied jazz vocals at the University of Cape Town and at the Royal Conservatory of The Hague in the Netherlands and started playing music professionally in 1997 in Johannesburg. She plays concerts all over the world and her fans include the harmonica legend Toots Thielemans and the Queen of Vocal Jazz Dianne Reeves.

YUL (drums, percussion)
Born in 1973 in Aix-en-Provence, France
Preferring studio sessions to the stage, “Yul“ (Ulrich Edorh) is one of Marseille‘s hidden musical treasures. He shared several working sessions with Nina Simone, when the American jazz singer was at the end of her life. He works regularly with bassist Reggie Washington and keyboardist Bobby Sparks.

MARVIN SEWELL (guitar)
Born in 1963 in Chicago, Illinois
Marvin is a blues/jazz guitarist, who has been called “maybe the greatest guitarist you‘ve never heard of“. He has played with many leading artists, notably Cassandra Wilson, Jack DeJohnette, Lizz Wright and Jason Moran. He performed with Cassandra Wilson on two numbers in the 2003 PBS documentary, “Martin Scorsese Presents: The Blues“.

TERENCE “SUB Z“ NICHOLSON (spoken word)
Born in 1968 in Washington DC
Terence has recorded and toured worldwide with Steve Coleman, Omar Sosa and the hip-hop band Opus Akoben. He served in different continents as an envoy for the American Music Abroad Program. For over 30 years he has been teaching Chinese martial arts and he holds over 20 gold medals from national and international tournaments. 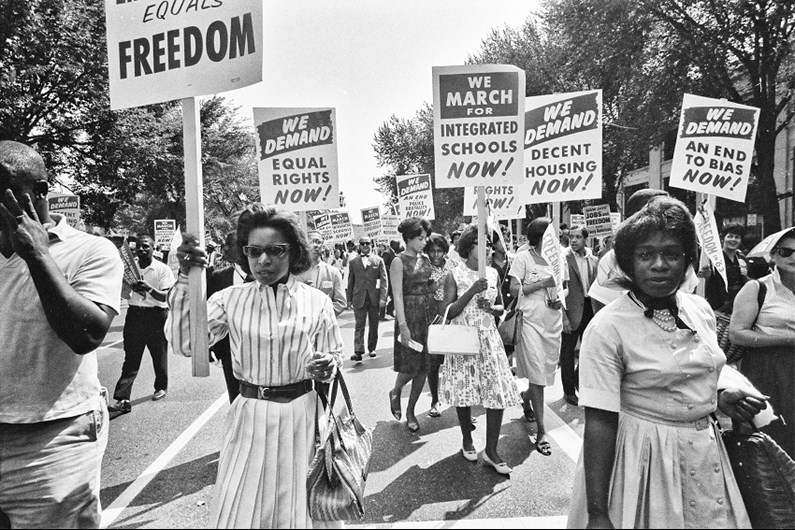